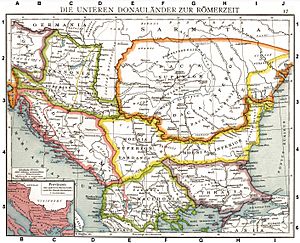 A map of the Roman provinces of Illyricum, Macedonia, Dacia, Moesia, Pannonia and Thracia

The Roman province of Dacia was in the Balkans. It included Transylvania, Banat and Oltenia in the modern Romania, and Muntenia and southern Moldova. It did not include the nearby regions of Moesia.

The place where Dacia once was is now made up of Romania and Moldova, along with some parts of Hungary, Bulgaria and Ukraine. The capital of Dacia was Sarmizegetusa. The name of Romania came probably from the idea of the ​​former "Romans country".

Dacia was added to the Roman Empire in its earliest days by the Emperor Trajan. Despite its wealth, it was the first province from which Rome withdrew.

All content from Kiddle encyclopedia articles (including the article images and facts) can be freely used under Attribution-ShareAlike license, unless stated otherwise. Cite this article:
Dacia Facts for Kids. Kiddle Encyclopedia.