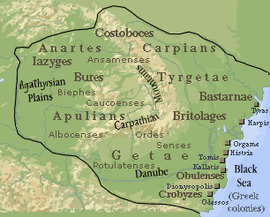 Dacian kingdom during the reign of Burebista, 82 BC

The Dacians were an Indo-European people, the ancient inhabitants of Dacia (located in the area in and around the Carpathian mountains and east of there to the Black Sea), present-day Romania and Moldova, parts of Sarmatia and Scythia Minor in southeastern Europe.

All content from Kiddle encyclopedia articles (including the article images and facts) can be freely used under Attribution-ShareAlike license, unless stated otherwise. Cite this article:
Dacians Facts for Kids. Kiddle Encyclopedia.