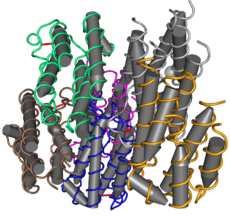 The molecular structure of human interferon-alpha

Interferons (IFNs) are proteins released by body cells in response to pathogens such as viruses, bacteria, parasites or to tumor cells. They allow cells to trigger the defenses of the immune system.

IFNs belong to the large class of glycoproteins known as cytokines. Interferons are named after their ability to "interfere" with virus replication inside host cells.

IFNs also have other functions:

About ten distinct IFNs have been identified in mammals; seven of these have been described for humans. All IFNs are very important for fighting viral infections.

All content from Kiddle encyclopedia articles (including the article images and facts) can be freely used under Attribution-ShareAlike license, unless stated otherwise. Cite this article:
Interferon Facts for Kids. Kiddle Encyclopedia.