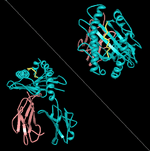 The HLA ligand for KIR

Natural killer cells (or NK cells) are a type of lymphocyte critical to the innate immune system. NK cells provide a rapid response to cells infected by viruses, or to bacterial cells. The response happens about 3 days after infection. NK cells also respond to tumour formation.

NK cells are unique: they have the ability to recognise stressed cells in the absence of antibodies and major histocompatibility complex (MHC). This allows for a much faster immune reaction.

In early experiments in cancer patients and animals, investigators found what was called a "natural" reactivity. That is, a certain population of cells seemed to be able to kill tumour cells without previously being sensitized to them. At first many thought that these observations were artifacts. However, by 1973, 'natural killing' activity was established across a wide variety of species, and the existence of a separate line of cells with this ability was suggested.

To control their cytotoxic activity, NK cells have two types of surface receptors: activating receptors and inhibitory receptors. When the NK cell is activated, it destroys the cells which have switched it on.

Small granules in their cytoplasm contain proteins and enzymes called granzymes. They are released close to a cell which has triggered their action. A protein perforin forms pores in the cell membrane of the target cell, creating a channel through which enzymes and other molecules can enter. This kills the target cell. The details vary according to whether the target is a virus, a bacterium or a tumour cell.

These inhibitory receptors recognize MHC class I molecules, which could explain why NK cells kill cells with low levels of MHC class I molecules. This inhibition is crucial to the role played by NK cells. MHC class I molecules are main way cells display viral or tumor antigens to cytotoxic T-cells. A common evolutionary adaptation to this seen in both intracellular microbes and tumours is a long-term down-regulation of these MHC I molecules. This makes the cells impervious to T-cell action. NK cells may have evolved as an evolutionary response: the loss of MHC would deprive these cells of the inhibitory effect of MHC and make them vulnerable to NK cell attack.

All content from Kiddle encyclopedia articles (including the article images and facts) can be freely used under Attribution-ShareAlike license, unless stated otherwise. Cite this article:
Natural killer cell Facts for Kids. Kiddle Encyclopedia.