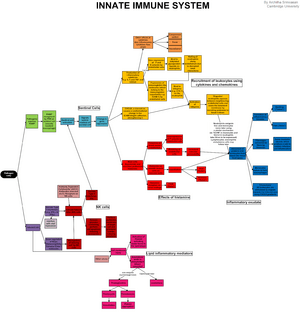 Innate immune systems give immediate defence against infection, and are found in all plant and animal life. The innate system is the evolutionarily older defense strategy. It is the main immune system found in plants, fungi, insects, and in primitive multicellular organisms. The system is not adaptable and does not change over the course of an individual's lifetime.

Old skin cells drop off, and this helps remove bacteria that have stuck to the skin.

The flushing action of tears and saliva helps prevent infection of the eyes and mouth.

Inflammation is one of the first responses of the immune system to pathogens or foreign substances that get past the anatomical barriers.

Inflammation is stimulated by chemical factors released by injured cells. It sets up a physical barrier against the spread of infection, and promotes healing of damaged tissue after the clearance of pathogens.

The complement system is a biochemical cascade of the immune system that helps antibodies clear pathogens or mark them for destruction by other cells.

The cascade is composed of many plasma proteins, which are made in the liver. The proteins work together to:

Elements of the complement cascade can be found in many non-mammalian species including plants, birds, fish and some species of invertebrates. 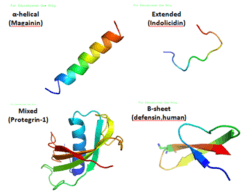 Antimicrobial peptides, or host defence peptides, are part of the innate immune response. They are found among all classes of life. These peptides are potent, broad spectrum antibiotics. They kill both gram negative and gram positive bacteria, mycobacteria (including Mycobacterium tuberculosis), enveloped viruses, fungi and even transformed or cancerous cells.

All content from Kiddle encyclopedia articles (including the article images and facts) can be freely used under Attribution-ShareAlike license, unless stated otherwise. Cite this article:
Innate immune system Facts for Kids. Kiddle Encyclopedia.