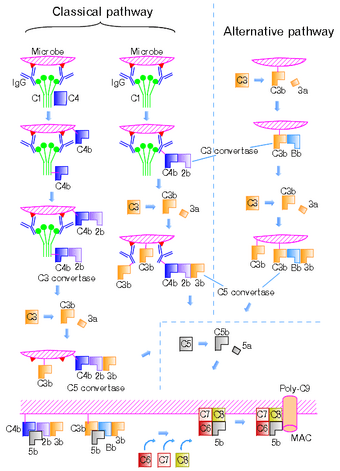 The classical and alternative complement pathways

The complement system helps or “complements” the ability of antibodies and phagocytic cells to clear pathogens from an organism. It is part of the innate immune system.

The complement system consists of a number of small proteins found in the blood, made by the liver. Normally they circulate as inactive precursors ("pro-proteins"). When stimulated by a trigger, proteases split specific proteins to release active cytokines. This starts a series (a cascade) of further cleavages which release more cytokines. This amplifies (makes bigger) the response. So, if the original stimulus was an invading bacterium, the cytokines disrupt the phospholipid bilayer cell membrane of the target, which kills it.

All content from Kiddle encyclopedia articles (including the article images and facts) can be freely used under Attribution-ShareAlike license, unless stated otherwise. Cite this article:
Complement system Facts for Kids. Kiddle Encyclopedia.