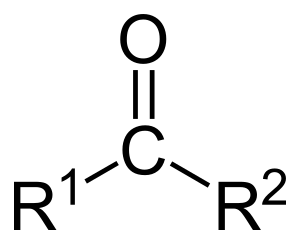 Structure of a ketone

A ketone is an organic compound that has a carbon atom with a double bond to an oxygen atom (this is called carbonyl functional group). This carbon atom must also have single bonds to two other carbon atoms.

A ketone can be produced, by oxidating a secondary alcohol.

A ketone will show a strong peak between 1690 and 1715cm-1 using infrared spectroscopy.

All content from Kiddle encyclopedia articles (including the article images and facts) can be freely used under Attribution-ShareAlike license, unless stated otherwise. Cite this article:
Ketone Facts for Kids. Kiddle Encyclopedia.