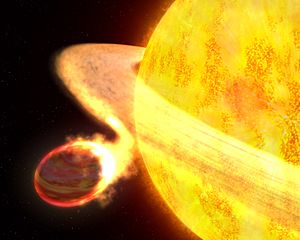 WASP-12b is an extrasolar planet orbiting the star WASP-12. It is said by NASA one of the hottest planet known, much hotter than Venus. It is extremely close to its star, about 2 million miles away from it. It is a gas giant and is bigger than Jupiter. The average temperature there can get up to 1500 degrees Celsius. For comparison, Mercury in our solar system's average temperature is around 427 degrees Celsius. WASP-12b is so close to its star, that the star pulls mass from the planet creating a comet-like trail behind it.

All content from Kiddle encyclopedia articles (including the article images and facts) can be freely used under Attribution-ShareAlike license, unless stated otherwise. Cite this article:
WASP-12b Facts for Kids. Kiddle Encyclopedia.