Kids Encyclopedia Facts
This page is about the town. For other uses, see Sturminster Newton (disambiguation). 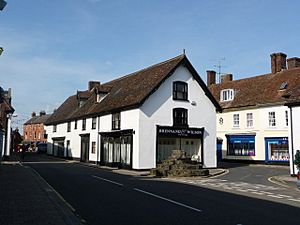 The town centre, showing the remains of the 15th-century market cross.

Sturminster Newton is a town and civil parish in the Blackmore Vale area of Dorset, England. It is situated on a low limestone ridge in a meander of the River Stour. The town is at the centre of a large dairy agriculture region, around which the town's economy is built. The larger part of the town (Sturminster) lies on the north side of the river, and includes most shops and services, whilst to the south is the smaller Newton. Between these two areas is a wide flood plain. The town was the home of poet and author William Barnes, and, for part of his life, Thomas Hardy. The town has 43 shops, a primary and secondary school, and a school and college catering for children with Special educational needs. In the 2011 census the town's civil parish had a population of 4,945.

A market is held in the town on Mondays. One of the largest cattle markets in England used to be held here, but it was closed in 1998 and now in its place stands a housing estate and a 300-seat community arts centre called The Exchange. The town is part of the historic West Country Carnival circuit.

Sturminster Newton was recorded in the Anglo Saxon charter in 968 as Nywetone at Stoure, and in the Domesday Book as Newentone. Newton refers to a new farm or estate, and Sturminster to a church (minster) on the Stour. Originally the two parts of the name referred to the settlements on the north and south of the river, but were combined to distinguish the town from Sturminster Marshall and other Newtons.

Hidden on the hill above the bridge over the river are the ruins of Sturminster Newton Castle, a manor house rather than a defensive building. The 14th-century building stands on a crescent shaped mound which could be the site of an Iron Age hill fort. The town and castle were part of Sturminster Newton hundred.

Sturminster Newton is situated at a historic fording point on the Stour. The ford was replaced in the 16th century with a six-arch stone bridge, and a quarter kilometre embankment crossing the flood plain. The bridge was widened from 12 to 18ft in 1820. A 19th-century plaque affixed to the bridge states that anyone damaging the bridge would be transported to Australia as a felon. On the south bank of the river is the watermill which was restored in 1980 and is now a museum.

The town centre is built in a mixture of styles, including 17th- and 18th-century thatched cottages, Georgian stone buildings, and 19th-century brick buildings. Set back from the main road is the market square and parish church, which was rebuilt in 1486 by the abbots of Glastonbury. The church was heavily modified in the 19th century, but the carved wagon roof remains.

From 1863 the Somerset and Dorset Railway ran through the town until 1966 when it was dismantled as part of the Beeching Axe. The railway goods yard gave milk trains access to the private sidings of the local creamery. Started in 1913 by local farmers to produce cheddar cheese and pasteurised milk, it was taken over by the Milk Marketing Board in 1937. Milk trains ceased in 1966 on closure of the line, with the creamery remaining in operation until 2000 under successor Dairy Crest. The station and goods yard were demolished in the mid 1970s.

The town is set in the vale on which Thomas Hardy based his fictional Vale of the little dairies (in his Tess of the d'Urbervilles) and Sturminster had the largest cattle market in Europe, which stood close to the town centre until it was closed and demolished in 1997.

In the 2011 census the town's civil parish—which also includes the small settlements of Bagber, Broad Oak and Puxey— had 2,016 dwellings, 1,910 households and a population of 4,292.

Sturminster Newton is the home of the annual UK Boogie Woogie Festival, which in 2009 saw an appearance from veteran boogie woogie star Little Willie Littlefield.

The Exchange, a community arts and conference centre, on Old Market Hill, was built on the site of the old cattle market. It was officially opened, by Julian Fellowes, in December 1995 and provides a venue for music concerts, drama and other events.

Sturminster Newton is twinned with:

All content from Kiddle encyclopedia articles (including the article images and facts) can be freely used under Attribution-ShareAlike license, unless stated otherwise. Cite this article:
Sturminster Newton Facts for Kids. Kiddle Encyclopedia.