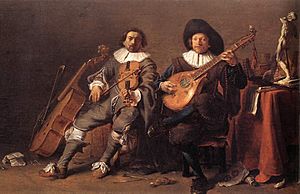 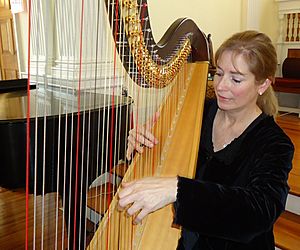 Harpist Elaine Christy plays with both hands approaching the strings from either side of the harp. The harp is a chordophone with prominent strings.

A chordophone is a musical instrument that makes sound by way of a vibrating string or strings stretched between two points.

What many would call string instruments are classified as chordophones. Violins, guitars, lyres, and harps are examples.

When a chordophone is played, the strings vibrate and interact with each other. There is usually something that makes the sound resonate, such as the body of a guitar or violin. The strings are set into motion by either plucking (like a harp), strumming (like a guitar), by rubbing with a bow (like a violin, cello or double bass), or by striking (like a piano or berimbau). Common chordophones are the banjo, cello, double bass, dulcimer, guitar, harp, lute, piano, sitar, ukulele, viola and violin.

A 3,300-year-old stone carving of a Hittite bard playing a stringed instrument is the oldest iconographic representation of a chordophone and clay plaques from Babylonia show people playing an instrument that has a strong resemblance to the guitar, indicating a possible Babylonian origin for the guitar.

All content from Kiddle encyclopedia articles (including the article images and facts) can be freely used under Attribution-ShareAlike license, unless stated otherwise. Cite this article:
Chordophone Facts for Kids. Kiddle Encyclopedia.