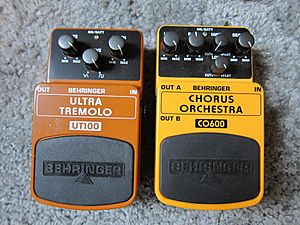 An effect pedal is an electronic device that can change the sound of an instrument or the voice of a person. Typical effects include echo, chorus, distortion, tremolo, reverb and flanger. Effect pedals which are made to guitar typically use phone connector for connecting.

All content from Kiddle encyclopedia articles (including the article images and facts) can be freely used under Attribution-ShareAlike license, unless stated otherwise. Cite this article:
Effect pedal Facts for Kids. Kiddle Encyclopedia.