David Popper (born Prague, 16 June 1843; died Baden, Austria, 7 August 1913) was a Bohemian cellist and composer. He composed many works for the cello which today are performed by cellists all over the world. 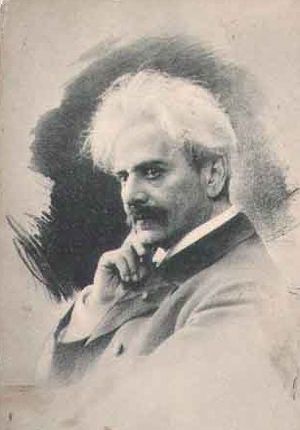 Popper was born in the old Jewish part of Prague. His father was a Cantor in two synagogues. When he was three years old he was imitating his father’s singing. He learned the violin when he was six and, at the age of twelve, he got a place to study music at the Prague Conservatory, but he had to learn the cello. His cello teacher was Julius Goltermann. His first job was as cellist to the Prince of Hohenzollern who soon gave him the title “Kammervirtuoso”. He was only 21 when he played a difficult concerto by Robert Volkmann. The conductor, Hans von Bülow, was very impressed and so were the critics. He gave many concerts in Vienna and became very famous. He started to travel around Europe, visiting England and Russia. He had a lot of energy and was able to compose a lot while travelling. He composed many short cello pieces. His Elfentanz (Dance of the Elves) and Spinning Song were especially popular with the audiences.

In 1886 Popper married for the second time. In the same year he took up a job at the Royal Hungarian Academy of Music in Budapest. He was a famous teacher and charged a high fee for lessons. He formed a string quartet with three other musicians including the violinist Jenő Hubay. Hubay and Popper often played piano trios with Johannes Brahms.

Popper made a long visit to England and Scotland where he was described as the world’s greatest cellist by many people including George Bernard Shaw. When he returned to Prague he played with Béla Bartók who was only 19 years old and not yet famous. He was also impressed when he heard the young Pablo Casals, although he did not agree with his technique.

Popper had one son who died of tuberculosis in 1911. Two years later Popper slipped on an icy pavement. He was never able to use his right arm again. He died the next summer of a heart attack.

Popper composed a very large number of cello pieces, many of which are short pieces suitable for encores at a recital. One of the most popular (and not too difficult) is the Gavotte in D major. He composed a Requiem for three cellos and orchestra, and he wrote four cello concertos. However, his most important work for cellists is a collection of studies called Hochschule des Violoncellspiels (High School of Cello Playing). This book contains 40 etudes, or musical exercises to develop technique, and is widely used today by cello students to improve their playing.

All content from Kiddle encyclopedia articles (including the article images and facts) can be freely used under Attribution-ShareAlike license, unless stated otherwise. Cite this article:
David Popper Facts for Kids. Kiddle Encyclopedia.