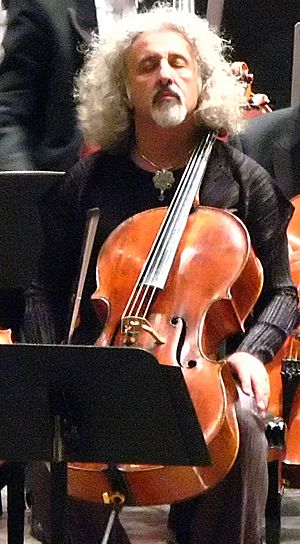 Maisky studied with Mstislav Rostropovich at the Moscow Conservatory in the Soviet Union. In 1966 he won 6th Prize at the Moscow International Tchaikovsky Competition. In 1970, he was imprisoned in a labor camp near Gorky for 18 months. When he was set free, he moved to Israel and became a citizen there. He also studied for a time with Gregor Piatigorsky in Los Angeles. He currently lives in Belgium.

In his performing and recording career, Maisky has worked with artists such as the pianists Martha Argerich, Radu Lupu, and Sergio Tiempo, the violinists Gidon Kremer and Janine Jansen, and the conductors Leonard Bernstein, Zubin Mehta, Vladimir Ashkenazy, Daniel Barenboim, and Giuseppe Sinopoli. He has played around the world and has made many recordings.

All content from Kiddle encyclopedia articles (including the article images and facts) can be freely used under Attribution-ShareAlike license, unless stated otherwise. Cite this article:
Mischa Maisky Facts for Kids. Kiddle Encyclopedia.