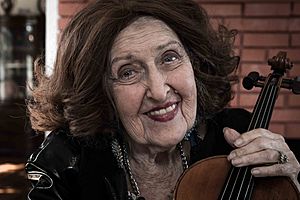 Ida Haendel, CBE (15 December 1928 – 1 July 2020) was a Polish-born British violinist. Haendel was a child prodigy. Her career lasted over seven decades. She became an influential teacher. Haendel was born in Chełm, Poland.

In 1991 she was appointed Commander of the Order of the British Empire (CBE) by Queen Elizabeth II. She received an honorary doctorate from the Royal College of Music, London in 2000 and from McGill University in 2006.

Haendel died on 1 July 2020 from kidney cancer at her home in Pembroke Park, Florida, aged 91.

All content from Kiddle encyclopedia articles (including the article images and facts) can be freely used under Attribution-ShareAlike license, unless stated otherwise. Cite this article:
Ida Haendel Facts for Kids. Kiddle Encyclopedia.