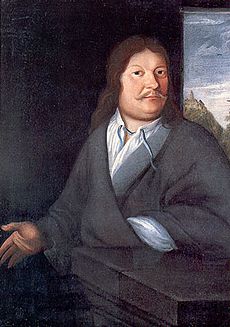 In 1671, Ambrosius moved his family to Eisenach, where he was employed as a court trumpeter and director of the town musicians. He married his first wife Maria Elisabeth Lämmerhirt on 1 April 1668, and they had eight children. Four of these children became musicians, including Johann Sebastian. Marie died and was buried on 3 May 1694. On 27 November 1694 Ambrosius married Barbara Margaretha. This was her third marriage; both her former husbands, including Johann Günther Bach, had died. She had two young daughters. Ambrosius became very sick, and died in Eisenach less than three months later. Barbara was unable to look after all the children, so Johann Jacob Bach and Johann Sebastian Bach, moved in with the eldest son, Johann Christoph Bach.

All content from Kiddle encyclopedia articles (including the article images and facts) can be freely used under Attribution-ShareAlike license, unless stated otherwise. Cite this article:
Johann Ambrosius Bach Facts for Kids. Kiddle Encyclopedia.