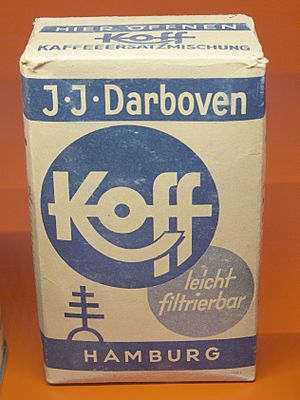 Coffee substitutes are non-coffee products, usually without caffeine, that are used to imitate coffee. Coffee substitutes can be used for medical, economic and religious reasons, or simply because coffee is not readily available. Roasted grain beverages are common substitutes for coffee.

In World War II, acorns were used to make coffee, as were roasted chicory and grain. During the American Civil War coffee was also scarce in the South:

For the stimulating property to which both tea and coffee owe their chief value, there is unfortunately no substitute; the best we can do is to dilute the little stocks which still remain, and cheat the palate, if we cannot deceive the nerves.

—"Substitutes for Coffee", The Southern Banner, 1865

Coffee substitutes are sometimes used in preparing foods served to children or to people who avoid caffeine, or in the belief that they are healthier than coffee.

Some culinary traditions, like that of Korea, include beverages made from roasted grain instead of coffee or tea (including boricha, oksusu cha, and hyeonmi cha). These do not substitute for coffee but fill its niche as a hot drink (optionally sweetened).

Grain coffee and other substitutes can be made by roasting or decocting various organic substances.

Chicory has been sold commercially on a large scale since around 1970, and it has become a mainstream product. It was widely used during the American Civil War on both sides.

Postum is an instant type beverage used in place of coffee. It reached the height of its popularity during World War II. 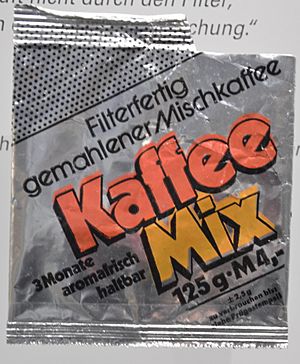 All content from Kiddle encyclopedia articles (including the article images and facts) can be freely used under Attribution-ShareAlike license, unless stated otherwise. Cite this article:
Coffee substitute Facts for Kids. Kiddle Encyclopedia.