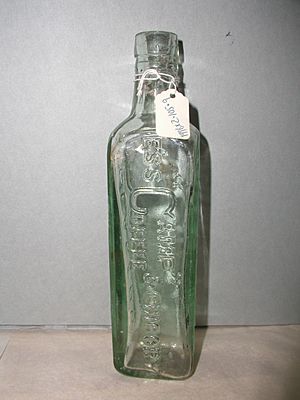 Camp Coffee is a concentrated syrup which is flavored with coffee and chicory, first produced in 1876 by Paterson & Sons Ltd, in Glasgow.

The current ingredients of Camp Chicory & Coffee are sugar, water, chicory extract (25%) and dried coffee extract (4%). Camp is a dark brown, syrupy liquid. It has a smooth flavour of chicory and coffee but with a very sweet, predominantly chicory aftertaste.

Camp is generally used by mixing with hot water or with warm milk in much the same way as cocoa, or added to cold milk and ice to make iced coffee. It is commonly found in the baking aisles of supermarkets because it is also used as an ingredient in coffee cakes and other confectionery. 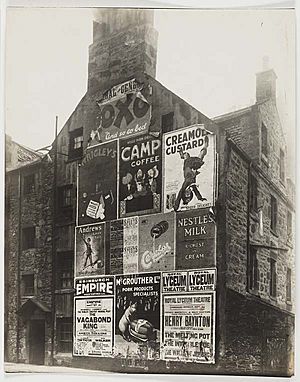 Camp Coffee was created in 1885 by Campbell Paterson (1851-1927) of R. Paterson & Son in Glasgow. The company specialised in cordials, and their best-selling product was a raspberry cordial often added to whisky or brandy to create a drink known as "Cuddle-me-Dearie". The coffee essence was developed by Campbell Paterson for domestic use, to avoid the complex and then expensive equipment required for coffee drinking.

Legend has it (mainly due to the picture on the label) that Camp Coffee was originally developed as an instant coffee for military use. The label is classical in tone, drawing on the romance of the British Raj. It includes a drawing of a seated Gordon Highlander (supposedly Major General Sir Hector MacDonald) being served by a Sikh soldier holding a tray with a bottle of essence and jug of hot water. They are in front of a tent, at the apex of which flies a flag bearing the drink's slogan, "Ready Aye Ready". That was also the motto of the 59th Scinde Rifles (Frontier Force) of the British Indian Army. In this context, the Scots word 'aye' has the meaning of 'always' rather than 'yes', and indicates, in the case of the drink, that it is 'always ready' to be made.

The original label, by William Victor Wrigglesworth, depicted a Sikh servant waiting on a seated Scottish soldier. A feature of this label was that the server carried a tray on which there was a bottle of Camp Coffee, which carried the same label showing a bottle of Camp Coffee and so on into infinity. A later version of the label, introduced in the mid-20th century, removed the tray from the picture, thus removing the infinite bottles element (the Droste effect), and was seen as an attempt to avoid the connotation that the Sikh was a servant, although he was still shown waiting while the kilted Scottish soldier sipped his coffee. The current version, introduced in 2006, depicts the Sikh as a soldier, now sitting beside the Scottish soldier, and with a cup and saucer of his own.

Camp Coffee is an item of British nostalgia, because many remember it from their childhood. It is still a popular ingredient for home bakers making coffee-flavoured cake and coffee-flavoured buttercream.

In late 1975, Camp Coffee temporarily became a popular alternative to instant coffee in the UK, after the price of coffee doubled due to shortages caused by heavy frosts in Brazil.

All content from Kiddle encyclopedia articles (including the article images and facts) can be freely used under Attribution-ShareAlike license, unless stated otherwise. Cite this article:
Camp Coffee Facts for Kids. Kiddle Encyclopedia.