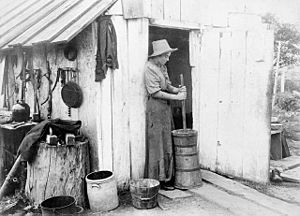 Churning is the process of shaking up cream or whole milk to make butter, usually using a butter churn. In Europe from the Middle Ages until the Industrial Revolution, a churn was usually as simple as a barrel with a plunger in it, moved by hand. These have mostly been replaced by mechanical churns.

Butter is essentially the fat of milk. It is usually made from sweet cream (that is, cream skimmed from milk rather than whey). In the USA, Ireland, the UK and the Nordic countries, salt is usually added to it. Unsalted (sweet) butters are most commonly used in the rest of Europe. However, it can also be made from acidulated or bacteriologically soured cream. Well into the 19th century butter was still made from cream that had been allowed to stand and sour naturally. The cream was then skimmed from the top of the milk and poured into a wooden tub.

Buttermaking was done by hand in butter churns. The natural souring process is, however, a very sensitive one and infection by foreign microorganisms often spoiled the result. Today's commercial buttermaking is a product of the knowledge and experience gained over the years in such matters as hygiene, bacterial acidifying and heat treatment, as well as the rapid technical development that has led to the advanced machinery now used. The commercial cream separator was introduced at the end of the 19th century, the continuous churn had been commercialized by the middle of the 20th century. 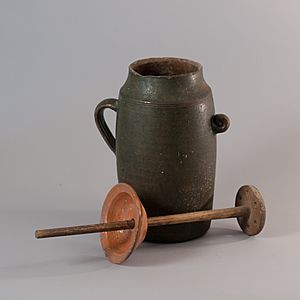 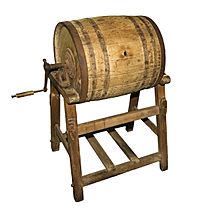 Changing whole milk to butter is a process of transforming a fat-in-water emulsion (milk) to a water-in-fat emulsion (butter). Whole milk is a dilute emulsion of tiny fat globules surrounded by lipoprotein membranes that keep the fat globules separate from one another.

Butter is made from cream that has been separated from whole milk and then cooled; fat droplets clump more easily when hard rather than soft. However, making good butter also depends upon other factors, such as the fat content of the cream and its acidity.

The process can be summarized in 3 steps:

Butter churns have varied over time as technology and materials have changed. 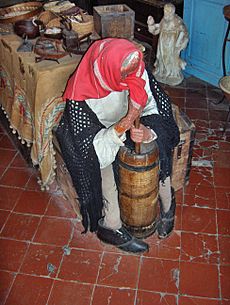 Small batches of butter can be churned at home by hand with the use of a decent-sized container, such as a Mason jar.

With electric mixers and food processors commonly available in most household kitchens, people can make butter in their own homes without a large churn. These small appliances are used to mix the cream until it is close to forming solid butter. This mixture is then mixed by hand to remove the buttermilk and water.

All content from Kiddle encyclopedia articles (including the article images and facts) can be freely used under Attribution-ShareAlike license, unless stated otherwise. Cite this article:
Churning (butter) Facts for Kids. Kiddle Encyclopedia.