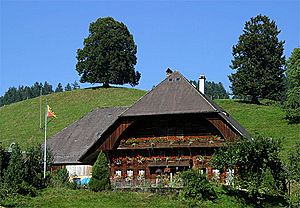 A typical farmhouse from the Emmental

Emmental is a part of Switzerland. It is made of low hills. Most of it is in the Canton of Berne. Its biggest rivers are the Emme and the Ilfis. The biggest localities are Burgdorf, Langnau and Huttwil.

The landscape is mostly made of meadows. There are some forests too. Most of the people live from raising cattle (mostly cows), or from things closely related to cattle-raising. Emmental cheese has its name from this region. Langnau is known for Ceramics. Pottery from the region is also well-known.

There is also some industry. The Emmental had one of the first fully-electric railway lines in Switzerland.

Jeremias Gotthelf was a famous writer who spent most of his life in the Emmental.

All content from Kiddle encyclopedia articles (including the article images and facts) can be freely used under Attribution-ShareAlike license, unless stated otherwise. Cite this article:
Emmental Facts for Kids. Kiddle Encyclopedia.