Johanna Louise Spyri (née Heusser; (12 June 1827 – 7 July 1901) was a Swiss-born author of novels, notably children's stories, and is best known for her book Heidi. Born in Hirzel, a rural area in the canton of Zurich, Switzerland, as a child she spent several summers near Chur in Graubünden, the setting she later would use in her novels.

She was born Johanna Heusser in Hirzel, Switzerland. Her father was a doctor and her mother was a poet.

She lived with her extended family: her grandmother, two aunties, and two cousins as well as her mother, father, two brothers and three sisters. This large household inspired her when she wrote Gritli's Children.

She spent several summers around Chur in Graubünden when she was young. This setting was later used in her novels. Her only education was her village school in Hirzel. She wrote poetry as a child.

She married Bernhard Spyri when she was 25. They met when they were children. They lived in Zurich, Switzerland and had only one child. In Zurich, they were friends with the musician Richard Wagner and poet Conrad Ferdinand Meyer. Both her husband and son died of tuberculosis in 1884. 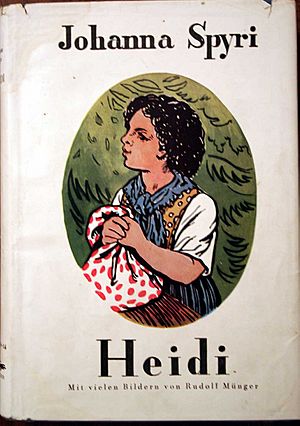 The inside cover of a 1929 edition of Heidi

In 1870, she started writing to help orphans and refugees of the Franco-Prussian War by describing their situation and giving money from her books to help them.

She wrote more than forty stories for children in German. Most of these stories have been translated into English. Heidi is still her most popular book, with new editions still published today.

She died in Berlin on July 7, 1901 andis buried with her family Zurich.

All content from Kiddle encyclopedia articles (including the article images and facts) can be freely used under Attribution-ShareAlike license, unless stated otherwise. Cite this article:
Johanna Spyri Facts for Kids. Kiddle Encyclopedia.