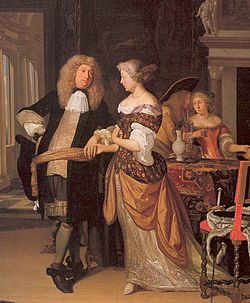 The elegant gentleman wears a coat, waistcoat, and breeches. The lady's bodice is long-waisted and her over skirt is draped and pinned up behind, Dutch, 1678

Fashion in the period 1660–1700 in Western European clothing is characterized by rapid change. The style of this era is known as Baroque.

This period also marked the rise of the periwig as an essential item of men's fashion. 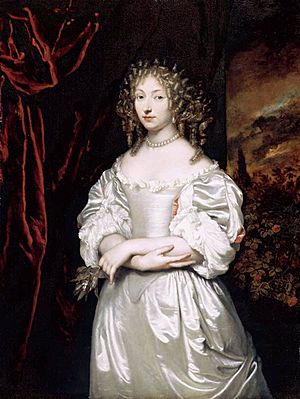 Susanna Huygens wore a long, tight white satin bodice with paned sleeves lined in pink and a matching petticoat. Her hair is worn in a mass of tight curls, and she wears pearl eardrops and a pearl necklace. 1667–69. 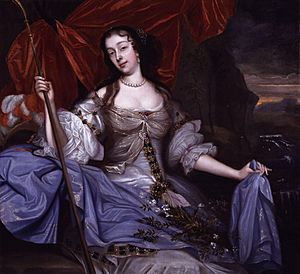 The wide, high-waisted look of the previous period was gradually superseded by a long vertical line, with horizontal emphasis at the shoulder. Full, loose sleeves ended just below the elbow at mid century and became longer and tighter in keeping with the new trend. The body was tightly corseted, with a low, broad neckline and dropped shoulder. In later decades, the overskirt was drawn back and pinned up to display the petticoat, which was heavily decorated.

Spanish court fashion remained out of step with the fashions that arose in France and England, and prosperous Holland also retained its own modest fashions, especially in headdress and hairstyles, as it had retained the ruff in the previous period.

Early in the period, hair was worn in a bun at the back of the head with a cluster of curls framing the face. The curls grew more elaborate through the 1650s, then longer, until curls were hanging gracefully on the shoulder. In the 1680s hair was parted in the center with height over the temples, and by the 1690s hair was unparted, with rows of curls stacked high over the forehead.

This hairstyle was often topped with a fontange, a frilly cap of lace wired to stand in vertical tiers with streamers to either side, named for Angélique de Fontanges. This was popular from the 1690s to the first few years of the 18th century.

With the end of the Thirty Years' War, the fashions of the 1650s and early 1660s imitated the new peaceful and more relaxed feeling in Europe. The military boots gave way to shoes, and a mania for baggy breeches, short coats, and hundreds of yards of ribbon set the style. The breeches became baggy. This era was also one of great variation and transition.

In 1666, Charles II of England, Scotland and Ireland, following the earlier example of Louis XIV of France, decreed that at court, men were to wear a long coat, a vest or waistcoat (originally called a petticoat, a term which later became applied solely to women's dress), a cravat, a periwig or wig, and breeches gathered at the knee, as well as a hat for outdoor wear. By 1680, this more sober uniform-like outfit of coat, waistcoat, and breeches became the norm for formal dress. 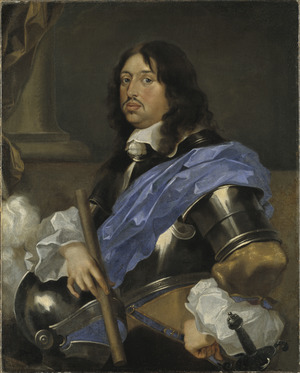 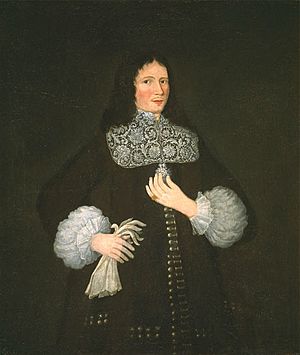 Puritan influence lingered in New England. This merchant of Boston wears his own long hair, not a wig. The flat lace collar with curved corners that came into fashion in the 1660s is worn over a simple dark coat and waistcoat, 1674. 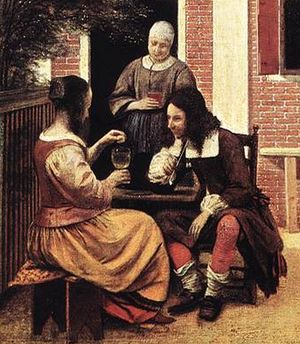 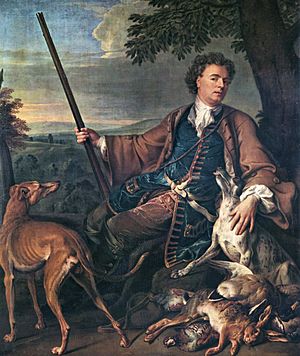 Artist Alexandre-François Desportes in hunting costume. His blue waistcoat has wide buttonholes, and he wears his own hair for outdoor activity. Self-portrait, 1699. 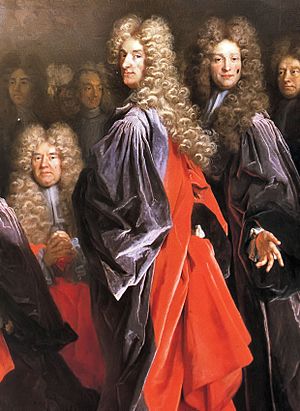 The elaborate wig of the 1690s

Throughout the period, men wore their hair long with curls well past the shoulders. The bangs (fringe) were usually combed forward and allowed to flow over the forehead a bit. Although men had worn wigs for years to cover up thinning hair or baldness, the popularity of the wig or periwig as standard wardrobe is usually credited to King Louis XIV of France.

Young boys wore skirts with doublets or back-fastening bodices until they were breeched at six to eight. They wore smaller versions of men's hats over coifs or caps. Small children's clothing featured leading strings at the shoulder.

All content from Kiddle encyclopedia articles (including the article images and facts) can be freely used under Attribution-ShareAlike license, unless stated otherwise. Cite this article:
Baroque Fashion 1650–1700 Facts for Kids. Kiddle Encyclopedia.