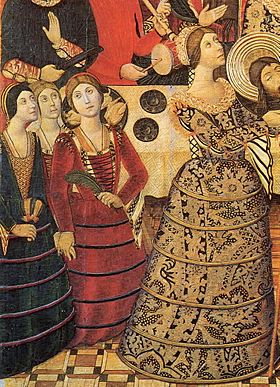 A farthingale is one of several structures used under Western European women's clothing in the 16th and 17th centuries to support the skirts in the desired shape and enlarge the lower half of the body. It originated in Spain in the fifteenth century. Farthingales served important social and cultural functions for women in Renaissance Europe as they were used, primarily by court women, to show their high social position and wealth. This is because these structures increased the amount of expensive fabrics used in the gowns that covered them.

All content from Kiddle encyclopedia articles (including the article images and facts) can be freely used under Attribution-ShareAlike license, unless stated otherwise. Cite this article:
Farthingale Facts for Kids. Kiddle Encyclopedia.