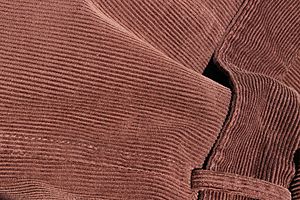 Close-up of a corduroy jacket

Corduroy is a strong fabric. It is made of twisted fibers. When woven, the fibers are parallel to one another in ridges. This makes the corduroy look striped. Corduroy is used to make clothing, including trousers, jackets and shirts. It is also used for furniture, including couches.

Some people think the word corduroy comes from the French words corde du roi (the cord of the King). There is no evidence that this is true.

Other names are used for corduroy. Some of those names are corded velveteen, elephant cord, pin cord, Manchester cloth and cords.

In continental Europe, corduroy is often called "Manchester" or "Cord".

All content from Kiddle encyclopedia articles (including the article images and facts) can be freely used under Attribution-ShareAlike license, unless stated otherwise. Cite this article:
Corduroy Facts for Kids. Kiddle Encyclopedia.