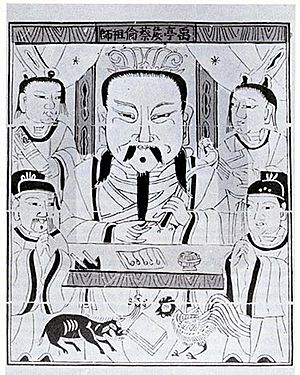 Cai Lun (simplified Chinese: 蔡伦; traditional Chinese: 蔡倫; pinyin: Cài Lún; Wade–Giles: Ts'ai Lun; c. 50 AD – 121) was a Chinese eunuch and politician. He is generally regarded as the inventor of paper. Earlier forms of paper, such as papyrus, were used in China from the 2nd century BC. However, Cai Lun developed another form of paper, which is used today.

Cai Lun was born in Leiyang (then called Guiyang), a part of Hunan. He lived during the Han Dynasty. His courtesy name was Jingzhong (敬仲). He served the government as a eunuch from AD 75, and in AD 89 got a promotion to be a "Shang Fang Si", someone who makes weapons, and a Regular Palace Attendant(中常侍). Cai Lun invented paper in the year 105. For his invention, he was rewarded by the Emperor. After his death he was considered the patron of papermaking. To make paper, Cai Lun used a pulp made of materials such as tree bark and rags. He then strained the liquid from the pulp and spread it out to dry. Legend has it that the mortar, a tool he used to grind materials, was buried in a pool near his grave.

All content from Kiddle encyclopedia articles (including the article images and facts) can be freely used under Attribution-ShareAlike license, unless stated otherwise. Cite this article:
Cai Lun Facts for Kids. Kiddle Encyclopedia.