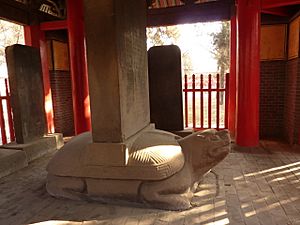 Zhu Qizhen (Chinese: 朱祁鎮; 29 November 1427 – 23 February 1464) was the sixth and eighth Emperor of the Ming dynasty. He ascended the throne as the Zhengtong Emperor (Chinese: 正統; pinyin: Zhèngtǒng; literally "right governance") in 1435, but was forced to abdicate in 1449, in favour of his younger brother the Jingtai Emperor, after being captured by the Mongols during the Tumu Crisis. In 1457, he deposed Jingtai and ruled again as the Tianshun Emperor (Chinese: 天順; pinyin: Tiānshùn; literally "obedience to Heaven") until his death in 1464. His temple name is Yingzong (英宗).

All content from Kiddle encyclopedia articles (including the article images and facts) can be freely used under Attribution-ShareAlike license, unless stated otherwise. Cite this article:
Emperor Yingzong of Ming Facts for Kids. Kiddle Encyclopedia.