East Village is a neighbourhood in East London that was designed and constructed as the Olympic Village of the 2012 Summer Olympic Games and has been converted for use as a new residential district, complete with independent shops, bars and restaurants. The area was formerly contaminated waste land and industrial buildings to the north of Stratford. 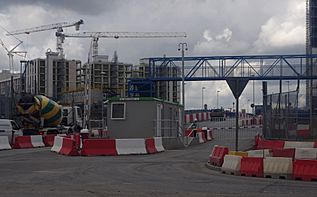 Aerial overview of the Olympic Park south towards the River Thames, during construction in April 2011. With the Olympic Stadium in the centre of picture, the Olympic Village is at the bottom, centre

As part of the regeneration programme within the bid for the 2012 Summer Olympics, the Olympic Village design to house the athletes was based on reusing the buildings after the games as a new residential district for Stratford. Through a competitive bidding process, the then Labour British government chose a proposal by Lend Lease Project Management & Construction which covered financing and construction of both the Olympic Village and part of the London Olympics Media Centre. This would both provide accommodation for 24,000 athletes, and afterwards provide a mix of low cost and private residential housing, within a community that would comprise offices, shops, schools and a health centre.

Lend Lease engaged a team of: architects Fletcher Priest; structural engineers Arup; and urban planning/landscape architecture firm West 8 and Vogt Landscape. They were briefed to design a village-garden type district to fit in with the wider urban park vision of the Olympic Park legacy, emulating the classical Victorian architecture layout of Maida Vale and other parts of Victorian west London. On a 27 hectares (67 acres) site, the plan provided for 11 residential plots, each made up of 5 to 7 blocks, built around communal squares and courtyards, with water features accentuating the closeness of the River Lea. Each of the 67 blocks is of between 8 and 12 storeys high, nominally laid out: Street level of mostly three storey townhouses, with front doors on street level to create an "active frontage". These are supplemented by a mix of single to three storey shops and offices. Floor 3 and above in the centre of the complex are communal raised gardens, which hide carparks beneath. At and above this level are a mix of low cost and private residential apartments, ranging from one to five bedroom. Each apartment provides generous floor spacing, and each includes its own balcony that is big enough for a table and chairs.

The whole Olympic Park site was proposed to be secured under a Compulsory Purchase Order (CPO) by the London Development Agency. In late 2005, a row broke out between then Mayor of London Ken Livingstone and Newham Council/Westfield Group over the use of the legal instrument. The site for the Olympic Village was to be located next to the £4Bn development of Stratford City, but access difficulties meant that the Olympic Park CPO extended onto the site for Stratford City. In November 2005, an agreement was made whereby the CPO over the Westfield site was removed, subject to agreed access provisions to the Olympic Village.

In light of the 2008 financial crisis, Lend Lease found difficulties in raising funds for the construction of the village on the commercial markets, the single largest project in the 2012 Summer Olympic scheme. The government via the Olympic Delivery Authority (ODA) hence agreed to underwrite a greater part of the required sum, and a scale-back of the project scale by 25%, on the proviso that athletes competing in non-London based events would be housed locally to their competition. Following the athletes' experiences in Beijing 2008, and in particular through comments concerning athletes' welfare by International Olympic Committee President Jacques Rogge, this compromise was to be reconsidered whilst pressure built for the finance deal to be resolved.

Up until this point, the proposed site had been a mix of former industrial buildings and contaminated waste land. The proposed site for the village provided two living camp sites for Irish Travellers, one on Clays Lane, Newham, and a second on Waterden Crescent, Hackney. The final part of the Olympic CPO covering the village site, secured in December 2006, was unsuccessfully challenged by the travellers in the High Court in May 2007. Towards the end of demolition/site clearance, on 12 November 2007 a fire broke out in an old industrial warehouse on Waterden Road, Hackney Wick, on the western edge of the proposed Olympic village site. With flames of 50 feet (15 m) in height engulfing the building and sending clouds of acrid black smoke over the city centre, it took 75 firefighters from the London Fire Brigade to bring the fire under control.

During the summer of 2012, the first use for the blocks was as the Olympic Village for the 2012 Summer Olympics. Taking the original design, the architects added temporary partitioning to create "hotel" style apartments catering for: 3,300 apartments: each to have a TV, internet access, and a private courtyard; and 17,320 beds (this is around 17,000 for athletes ~ 10903 (total number of them) and rest for officials during the Games): providing each athlete with 16 square metres (170 sq ft) floor space. In addition, the developers added two temporary buildings: a 17,000 square metres (180,000 sq ft) food hall, which was open 24 hours a day, capable of catering for 5,500 athletes at a time; and an entertainment hall of 10,000 square metres (110,000 sq ft), providing Video games for the athletes use and a communal rest space, plus a non-alcoholic bar. The village also included a plaza, where athletes were able to meet with friends and family. During the games

There is a full list of the buildings and the teams that stayed in them during the 2012 Olympics, and plaques in all East Village building foyers mark which countries stayed there. For example, the British team stayed in Calla House, Kotata House and Tayberry House; Greece in Hopground House; Spain in Carina House; Ukraine in Emperor House; Japan in Applegate House; Armenia, Peru and Slovenia in Calico House; Belgium, Cape Verde and Kyrgyzstan in Frye House; Costa Rica And Yemen in Galena House; And the Netherlands in Heinieken House.

After the conclusion of the games, the Olympic housing was adapted to create a new residential quarter to be known as East Village. The new construction created 2,818 new homes, including 1,379 affordable homes and houses, for sale and rent. The wider community is planned with wide vistas filled with gardens, parks and communal areas, within which are to be housed a school, a health clinic and shops. Having sold the affordable homes to Triathlon Homes in 2009 for £268 million, a competitive tender was issued in 2008 for ODA's interests in the remaining 1,439 private homes, along with six adjacent future development plots with the potential for a further 2,000 new homes, and long-term management of East Village.

The ODA received three bids: a joint-venture between James Ritblat's Delancey and Qatari Diar; Hutchison Whampoa; and Wellcome Trust, who bid to take over all the 2.5 square kilometres (0.97 sq mi) Olympic park. In August 2011, the ODA announced an agreement with Delancey/Qatari Diar, who paid £557 million for the East Village site, representing an estimated £275 million loss to the ODA and hence the British taxpayer. Culture Secretary Jeremy Hunt commented that the ODA never expected to recoup building costs: "It was an entirely empty site, it didn't have any infrastructure, roads or parks. There was always going to be a public sector contribution to help put those in." 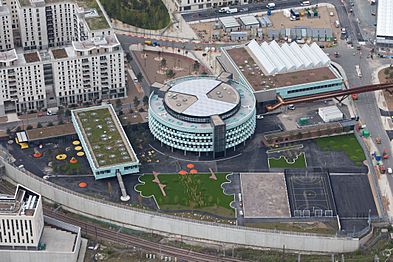 Temporary partitions installed during the games are being removed to create a range of one to five bed homes, ranging from apartments to townhouses. The hotel style designed rooms are being converted to include kitchens. The majority of the 1,439 private homes are to be let on a rental basis, instead of being sold, with the ownership remaining with Delancey/Qatari Diar and managed by Get Living London. This will create the first UK private sector residential fund of over 1,000 homes to be owned and directly managed as an investment. In addition, the developers created new parklands and additional transport links. A health centre for residents of East Village and the surrounding areas has also been constructed. Independent retailers have been brought in to East Village, which is now a neighbourhood in its own right.

The developers also added Chobham Academy, a new education campus with 1,800 places for students aged 3–19. During the Olympics, the school building was used as the main base for organising and managing teams. Rebuilt after the games, it opened in September 2013 as Chobham Academy, home to an education campus, comprising nursery, primary and secondary schools; an adult learning facility; and a community arts complex. 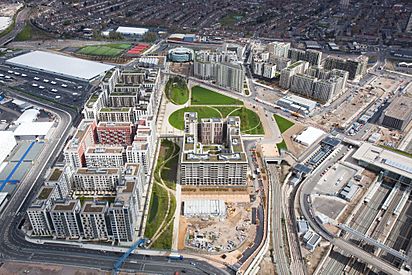 Olympic and Paralympic Village, April 2012. To the right is the Stratford International station.

East Village is located close to Stratford International station with fast services to central London (in 5–6 minutes) via High Speed One, on Southeastern trains, but not Eurostar, whose trains do not stop at Stratford International station. The Docklands Light Railway gives direct access to much of the east of London, and is one stop from Stratford station, which itself gives access to the Great Eastern Main Line and Lea Valley Lines, plus the Central line and Jubilee lines of the London Underground.

Generally, walking distance from Big Ben is about 10 km (6 mi). As of January 2016 Stratford station and Stratford International station have been moved to Zone 2.

Residential accommodation was designed to achieve Code for Sustainable Homes Level 4 on 8 September 2012.

All content from Kiddle encyclopedia articles (including the article images and facts) can be freely used under Attribution-ShareAlike license, unless stated otherwise. Cite this article:
East Village, London Facts for Kids. Kiddle Encyclopedia.