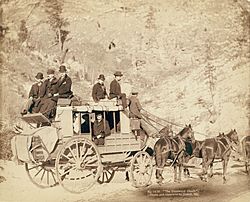 A stagecoach is a type of horse drawn coach for passengers and goods. They were one of the first forms of organized public transport and originated in the 1600s in Great Britain. Before railways were invented in the first part of the nineteenth century they were the fastest way to travel long distances. Stage coaches were operated across Europe and North America.

The coach would travel between stops called stages at which passengers could obtain food and drink and the horses that pulled the coach would be changed for fresh ones. Regularly changing horses meant the coach could travel much faster than other vehicles. They were mostly of light weight construction which also allowed them to go faster. Their speed meant they were used to carry mail and often called a mail coach.

The name is sometimes shortened to simply a "stage".

All content from Kiddle encyclopedia articles (including the article images and facts) can be freely used under Attribution-ShareAlike license, unless stated otherwise. Cite this article:
Stagecoach Facts for Kids. Kiddle Encyclopedia.