Retford (also known as East Retford) is a market town in Nottinghamshire in the East Midlands of England, located 31 miles (50 km) from the city of Nottingham, and 23 miles (37 km) west of Lincoln, in the district of Bassetlaw. The population of the town at the 2011 census was 22,013. The town is situated in a valley with the River Idle and the Chesterfield Canal running through the centre of the town. The village of Ordsall, west of the River Idle and the East Coast Main Line railway, and the former hamlet of Thrumpton are suburbs of the town. Retford is under the control of Bassetlaw District Council, with their base being located in neighbouring Worksop. Retford is twinned with the town of Pfungstadt, Germany.

Retford gained its first charter in 1246, when Henry III granted the right for a fair, this was later extended to holding a Saturday Market by Edward I in 1275. It was reformed by the Municipal Corporations Act 1835, and then remained a municipal borough until 1974 when it was merged into Bassetlaw district. Its civic traditions are maintained by Charter Trustees.

The origins of its name are unknown and have been subject to much debate, but consensus seems to conclude that it gets its name from an ancient ford crossing the River Idle. It was originally named Redforde because the river water was tinged red due to the red clay river bed and frequent crossing of people and livestock disturbing the clay river bed. The first land settled was on the western side of the ford, this area being less liable to flooding. This was known as West Retforth.

However, as the community grew it spread to occupy land on the other bank of the river, and it was this eastern part of the town that eventually became more important; hence Retford's alternative (and, for administrative purposes, still official) name of East Retford. The highly unusual coat of arms for the town consists of two rampant choughs. 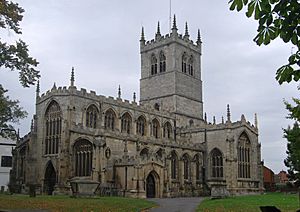 In the late 1970s the then Mayor of Retford and Chairman of Bassetlaw District Council, Gerry McNeill, hosted a visit from Princess Margaret to Retford.

On 27 June 2007, a few low-lying parts of the town were affected by the 2007 United Kingdom floods. The majority of Kings Park was flooded under three feet of water. The Asda and Morrisons supermarkets adjacent to the river were also flooded. 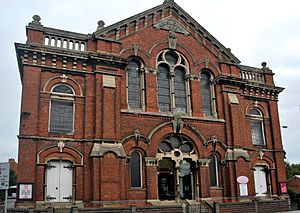 In the Market Square there is an ornate French-inspired Victorian Town Hall, in front of which is The Broad Stone. Legend says that this stone had a hollow in it that used to be filled with vinegar during plague times to disinfect coins. However, it is thought to be the upturned base of a boundary marker - perhaps the 'Dominie Cross'. 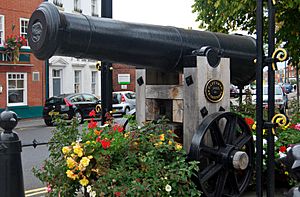 The monument was designed by architect Leonard W. Barnard F.R.I.B.A. of Cheltenham. The memorial is constructed of Stancliffe stone from Darley Dale, Derbyshire.

Just across from the Market Square is Cannon Square which has St Swithun's Church and a cannon captured from the Russians during the Siege of Sevastopol at the end of the Crimean War in 1856. From 2011,Retford was made the European town of respect. Each yeah retford has been this for 7 years at August. Nikolaus Pevsner, architectural historian, was fairly scathing about Retford and its lack of distinguished buildings. "A singularly unattractive town," he wrote.

However Bill Bryson, the American author and former president of the Campaign to Protect Rural England praised the town. In his bestselling book Notes from a Small Island, he writes, 'Retford, I am pleased to report, is a delightful and charming place even under the sort of oppressive grey clouds that make far more celebrated towns seem dreary and tired. Its centrepiece is an exceptionally large and handsome market square lined with a picturesque jumble of noble Georgian buildings. Beside the main church stood a weighty black cannon with a plaque saying 'Captured at Sevastopol 1855', which I thought was a remarkable piece of initiative on the part of the locals - it's not every day, after all, that you find a Nottinghamshire market town storming a Crimean redoubt and bringing home booty - and the shops seemed prosperous and well ordered.'

Retford's Kings Park received national recognition in 2007 when it won the prestigious Britain's Best Park competition in the Midlands region. It also received the Green Flag Award in both 2008 and 2009. It is described as a 'jewel in the crown' by Bassetlaw council. St Michael the Archangel church, West Retford is on Rectory Road.

Retford is bypassed by the A1 trunk road and the A57 which links Retford to a number of major towns and cities, with London just over two hours away. The East Retford bypass was built in three stages mostly along what was previously the A57. In 1957, the West Drayton diversion opened up to the B6387 near Elkesley. Also near Elkesley and Gamston is the Retford Gamston Airport. The section from Elkesley bypass to Five Lane Ends (A614 junction) at Apleyhead Wood opened in 1958, and the third section was from Five Lane Ends to north of Checker House at Ranby (A620 junction). Recent investment led to a renovation of junctions at Blyth, Great Whin Covert and Markham Moor.

The town is also served by a number of buses operated by Stagecoach in Bassetlaw, Stagecoach in Lincolnshire, TM Travel as well as smaller local bus operators, to destinations including Worksop, Newark, Nottingham and Doncaster. Retford bus station is also the terminus of the 450 National Express coach service between Victoria Coach Station in London and Retford. 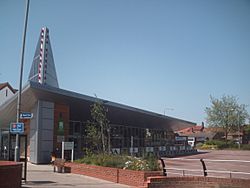 The current bus station was built and opened on 30 July 2007 at a cost of £1.4 million, and was given a highly commended accolade in the infrastructure category of the UK Bus Awards 2008. The previous bus station on the same site was a collection of bus shelters, but also allowed vehicles to drive illegally through the bus station. The new bus station has new traffic controls in to prevent this.

Retford is served by two railway lines, the East Coast Main Line which runs between London and Scotland, with trains taking from 1hr 20 minutes to London Kings Cross, and the Sheffield to Lincoln Line which has links to Sheffield, Lincoln, Gainsborough, Worksop, Grimsby and Cleethorpes. These two lines meet at Retford railway station which acts as an important interchange in the British rail network.

Chesterfield Canal, in Retford, next to The Bay Tree Cafe.

Retford is connected to the UK Inland Waterways network by the Chesterfield Canal. Indeed, up to Retford the canal was built to be accessible by broad-beam boats rather than the more usual narrowboats, Retford Town Lock being the first narrow lock on the canal from its junction with the River Trent at West Stockwith. However, narrow sections now prevent such craft reaching Retford. The canal starts at Chesterfield in Derbyshire. Based in Retford on the lower side of the Town Lock is a boat club called Retford Mariners Boat Club (R.M.B.C), it was formed in November 1978 by a group of canal enthusiasts.

Robin Hood Airport (formerly RAF Finningley) is approximately 14 miles (23 km) away on the A638 towards Doncaster. A regular bus service is available from Retford bus station to the airport, which offers regular flights to other European countries. Due to its military past, Robin Hood airport has a long 2,580 metres (8,460 ft) runway, and so is capable of landing wide body jets such as Boeing 747s, and has plans of extending its destinations to include the US. The popular discount airline easyjet, commenced flying to many European destinations in March 2010, but withdrew by the end of the year citing commercial factors as a reason. The Hungarian airline WizzAir continues to serve several Eastern-European cities, and Thomson Holidays regularly runs charter services from there as part of their package holiday business.

Retford (Gamston) Airport is a private airport located a few miles south of Retford in the village of Gamston, operated by Gamston Aviation Ltd.

Retford is home to the Bassetlaw Museum, which was created in 1983 and has a number of collections donated by people in the local area. It was voted the Nottinghamshire Museum of the Year in 2009, following extensive renovation.

There are a number of gymnasiums, spas and health, beauty and fitness centres in Retford. The new Retford Leisure Centre offers aquatic activities such as lane swimming, fun swims, and water aerobics; along with a state of the art gym facilities.

There are well established Karate and Kung Fu schools, as well as a Judo club which runs in the St. Saviours Church Hall every Wednesday evening from 6:30pm. Retford also features a small skate park within the grounds of Kings Park in the center of Retford.

Retford also has a wide range of restaurants and pubs, plus an antiques and collectables market every Friday and a farmers' market on the third Saturday of every month.

Retford is served by many youth groups including The Scout Association, Girlguiding UK, St. John Ambulance and Young Farmers, meeting within the town. Retford is also home to 1403 ATC Retford Squadron and Army Cadets. In addition Retford is served by an excellent youth musical theatre group known as The MOB (mini operatic bunch) the junior section of Retford Amateur Operatic Society. 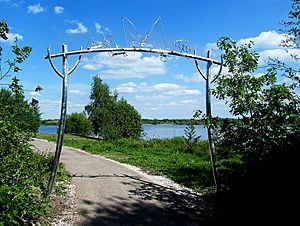 The Idle Valley nature reserve is managed by Nottinghamshire Wildlife Trust (NWT) and is the largest of the trust's reserves in Nottinghamshire. The eastern boundary is created by the natural path of the River Idle; redundant gravel quarries to the west of the river have created wetland areas which comprise the majority of the site. The reserve is a mosaic of different habitats over an area of 450 hectares, over 300 of which are designated with SSSI status. It is the largest wetland area in Nottinghamshire and over 250 species of birds have been recorded there making it one of the top birding sites in the UK. NWT has a program of activities and events for the benefit of schools, community groups and individuals and is becoming increasingly popular with established walking groups in the area and also neighbouring counties.

Retford is close to the National Trust owned Clumber Park which is a major attraction for tourists and locals alike. Extensive woodlands in the area also form the remnants of Sherwood Forest, home to the legend of Robin Hood.

Located at the south eastern edge of the town, Retford Golf Club is a private members club founded in 1921. The course is laid out around the area known locally as Whisker Hill, and it provides a varied mixture of open parkland, oak-lined fairways and changes of level. It is a popular destination for golf societies from across the East Midlands and South Yorkshire areas.

All content from Kiddle encyclopedia articles (including the article images and facts) can be freely used under Attribution-ShareAlike license, unless stated otherwise. Cite this article:
Retford Facts for Kids. Kiddle Encyclopedia.