Aurillac (Occitan: Orlhac) is a French commune, the prefecture of the Cantal department in the Auvergne-Rhône-Alpes region.

Aurillac was part of the former province of Auvergne, in the region called Haute-Auvergne.

The name of the city comes from Latin: Aureliacum, meaning "Roman villa of Aurelius".

The city of Aurillac is at the foot of the Cantal mountains (Mounts of Cantal), in the Massif Central. The city is along the Jordanne river, a tributary of the Cère river.

Aurillac has an oceanic climate (subtype Cfb in the Köppen climate classification) with cold winters and hot summers due to its distance from the ocean.

The inhabitants of Aurillac are known, in French, as Aurillacois (women: Aurillacoises).

Evolution of the population in Aurillac 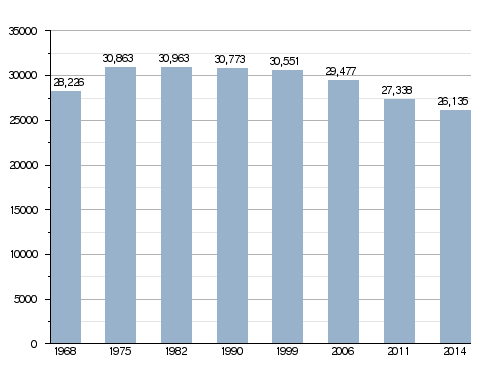 Aurillac is the prefecture of the Cantal department, the capital of the arrondissement of Aurillac and the administrative centre (French: chef-lieu) of three cantons:

Aurillac and Arpajon-sur-Cère are twinned with:

All content from Kiddle encyclopedia articles (including the article images and facts) can be freely used under Attribution-ShareAlike license, unless stated otherwise. Cite this article:
Aurillac Facts for Kids. Kiddle Encyclopedia.