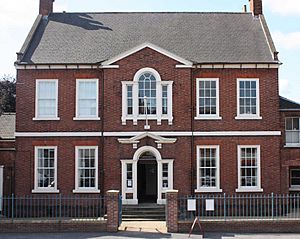 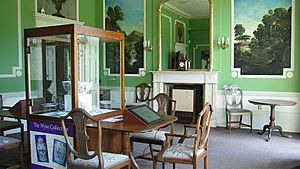 The Bassetlaw Museum is a museum in Retford, Nottinghamshire which documents the history of North Nottinghamshire from the earliest times to the present day. It is situated on Grove Street, Retford.

The Bassetlaw Museum was created in 1983 and has a number of collections donated by people in the local area. The collections include local history, archaeology, decorative and fine art, agriculture, costume and textiles. The museum is situated in the 18th century Grade II* listed Amcott House on Grove Street, Retford where it moved in 1986. Admission to the museum is free.

In July 2020, Bassetlaw Museum was the site of a community art project during the Coronavirus crisis called 'The Retford Positivity Rock Snake'.

All content from Kiddle encyclopedia articles (including the article images and facts) can be freely used under Attribution-ShareAlike license, unless stated otherwise. Cite this article:
Bassetlaw Museum Facts for Kids. Kiddle Encyclopedia.