Farmers Branch is a city in Dallas County, Texas, United States. It is an inner-ring suburb of Dallas and is part of the Dallas–Fort Worth metroplex. The population was 28,616 at the 2010 census.

On May 12, 2007, Farmers Branch became the first community in the nation to prohibit landlords from renting to most illegal immigrants. The ban was declared unconstitutional by a federal judge and upheld on appeal. Enforcement of that ban was stayed pending the outcome of its legal battle. After spending $6.1 million to defend the ordinance, it was ultimately defeated when the United States Supreme Court refused to hear the city's final appeal. 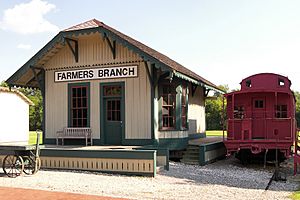 The community was first settled in the early 1850s. In 1842, Thomas Keenan, Isaac B. Webb, and William Cochran received original land grants in the area. By 1843, a community called Mustang Branch had been established. Mr. Cochran later changed the name to Farmers Branch to reflect the area's rich soil and farmland. Farmers Branch was the first location of the Texan Land and Emigration Company (or Peters Colony) in 1845. This made the community one of the best-known places in Dallas County during the 1840s because of its advertising throughout Europe and the United States. Baptist minister William Bowles opened a blacksmith shop and gristmill in 1845. On May 5, 1845, Isaac B. Webb donated land for Webb's Chapel Methodist Church, the first formal place of worship in Dallas County. A school was established in the church one year later. Webb became the first postmaster at the Farmers Branch post office, which opened on January 5, 1848. It continued to function until its closure in 1866. The post office reopened in 1875. To assure that railroads would eventually pass through Farmers Branch, prominent early settler Samuel Gilbert and others sold right-of-way through their land in 1874. Around three to four years later, the Dallas and Wichita Railway completed a track from Dallas – through Farmers Branch – to Lewisville. It was absorbed by the Missouri–Kansas–Texas Railroad in 1881. The community had a population of approximately 100 by 1890 with several businesses. The population had grown to 300 during the early 1900s. A brick school building was constructed in 1916. The number of people living in the community remained stable until after World War II.

Farmers Branch was incorporated as a city after an election was held on February 23, 1946. William F. (Bill) Dodson was elected as the city's first mayor. The implementation of city services began immediately after incorporation. In the 1950 census, Farmers Branch had a population of 915. In 1956, a home rule charter was approved that adopted a council-manager form of government. The rapid growth of the city during the 1950s was made apparent in the 1960 census, which recorded a total of 13,441 residents, a 1,369 percent increase over the 1950 figure. Most of the new residents commuted to nearby Dallas for employment. The population topped 27,000 by 1970. A variety of manufacturers producing items such as steel products, concrete, asphalt, cosmetics, and food products were operating in the city. The number of residents declined to 24,863 in 1980 and 24,250 in 1990. The falling population was offset, however, by the wide variety of businesses located in the city. Farmers Branch is home to a large number of corporations that have attained frontage along Interstate 635, the Dallas North Tollway, and Interstate 35E. Its Dallas North Tollway segment is part of the Platinum Corridor, and its land along Interstate 635 is an extension of the lengthy Irving Prairie office park. By 2000, the city's population had grown to 27,508. 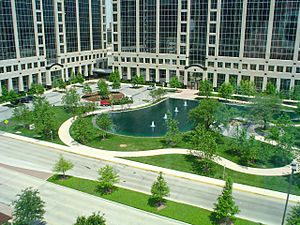 There were 9,766 households out of which 32.1% had children under the age of 18 living with them, 56.5% were married couples living together, 9.8% had a female householder with no husband present, and 29.0% were non-families. 22.9% of all households were made up of individuals and 7.6% had someone living alone who was 65 years of age or older. The average household size was 2.80 and the average family size was 3.31.

Farmers Branch is considered to be part of the humid subtropical region.

For many years, TV evangelist preacher Robert Tilton maintained his church on the northeast corner of the I-35E and I-635 interchange. The scandal that ABC News uncovered in the 1990s regarding thousands of prayer requests found in the dumpster, plus the divorce of Tilton and his then second wife and fellow preacher, Leigh Valentine, caused Tilton to leave the Dallas area and his land was given to the city for re-use. During the time that Tilton's Word of Faith congregation used the church building on this site, a K-12 school named Lexington Academy provided "Christian" education on the church campus.

In November 2006, the city of Farmers Branch entered the national spotlight when its council became the first in Texas to pass anti-illegal immigration measures, proposed by Councilman Tim O'Hare, which include fining landlords that rent to illegal aliens, and allowing local authorities to screen illegal aliens in police custody. The measures also included a provision making English the official language of the city. The original discussions in August 2006 additionally considered punishing employers who hire illegal immigrants and eliminating subsidies for illegal immigrants in the city's youth programs. After initially being set aside in favor of a resolution calling for the federal government to increase immigration-law enforcement, the rental, police, and official-language measures were adopted by the council on November 13, 2006 Following disputes over whether closed-door discussions of the measures violated the state's open-meetings law, a petition was circulated by opponents in order to force the council either to repeal the measures or to hold a special election to allow voters to decide the issue directly; the petition was certified in late December 2006, leading to the scheduling of a vote in May, until which time the measures would not be enforced.

On May 12, 2007, the referendum passed by a margin of 68% to 32%, despite last-minute opposition from mayor Bob Phelps and many city employees. O'Hare spoke from the headquarters of the proponents of the bill, challenging anyone who might be thinking of filing a lawsuit to prevent the implementation of the ordinance with countersuits. He also said that Farmers Branch would be willing to take the case all the way to the Supreme Court if necessary. On the same day, voters elected to the City Council two candidates who had supported the measures. In response to two acts of vandalism against Phelps' house, one after he announced his opposition to the measures, federal agents advised him to abandon his 20-year tradition of spending election night at City Hall and leave town instead until after elections were over.

On May 21, 2007, Judge Sam A. Lindsay of the U.S. District Court for the Northern District of Texas granted a temporary restraining order enjoining the city from enforcing the ordinance—one day before it was due to go into effect—until the court ruled on several plaintiffs' motions for a permanent restraining order. Just prior to a June 5 hearing over the preliminary injunction, the same judge dismissed from one of the lawsuits a group of business plaintiffs who had said they suffered business losses and simultaneously denied the request of the national organization Federation for American Immigration Reform (FAIR) to participate in the lawsuit on behalf of the defendants.

In 2008 Mayor Phelps retired after 23 years of service. Farmers Branch residents then elected Mayor Tim O'Hare, who led the campaign for the measures against illegal immigration.

On March 3, 2014, the Supreme Court declined to review the lower-court ruling that declared the ordinance unconstitutional ending the seven year legal battle.

Farmers Branch was one of fifteen cities to approve services of Dallas Area Rapid Transit in 1983 by levying a 1 cent sales tax. The city currently receives DART bus service, with service to downtown Dallas (by both regular route and express bus), the adjacent suburb of Carrollton and crosstown routes as well. On December 6, 2010, the city received light rail transit service with a station near the northeast corner of Interstates 635 and 35E on the Green Line, which runs from Pleasant Grove in southeast Dallas through downtown Dallas following I-35E up to Carrollton at Frankford Road.

The city is between Interstate 35E to the west, the Dallas North Tollway on the east and Interstate 635 to the south.

All content from Kiddle encyclopedia articles (including the article images and facts) can be freely used under Attribution-ShareAlike license, unless stated otherwise. Cite this article:
Farmers Branch, Texas Facts for Kids. Kiddle Encyclopedia.