St Swithun’s Church is a Grade II* listed Church of England parish in the Diocese of Southwell and Nottingham in East Retford. 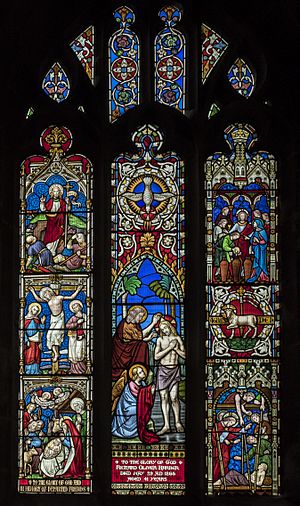 St Swithun's is a Grade II* listed church in Retford that is dedicated to St Swithun and which was founded in 1258. The church is located in the centre of town between Churchgate and Chapelgate.

The current building is of cruciform shape, now mainly of perpendicular architecture, but still preserving in its south and west doorways, and in the tracery of some of its windows, marks of earlier styles. The church has a square, battlemented tower, containing a clock and 10 bells. The oldest, virtually untouched, part is the north transept, although it has now been transformed into a chapel as a war memorial. The tower is supported by four massive arches and the nave and aisles are separated by arcades of five bays. There is a stone pulpit, an eagle lectern in oak, and a large organ erected in 1841. In the north transept is an incised slab to Henry Smyth (d 1496) and Sir Whatton Amcotts (d 1807) by William Kinnard, architect. The Victorian stained glass includes work by Clayton and Bell, Charles Eamer Kempe, Michael O’Connor, Hardman & Co, William Wailes and George Shaw.

The figure over the southern door is locally said to be of St Swithun, but according to Kidson is of a bishop. He says the figure was brought from a dissolved monastery in Portugal and was given to the Church, and placed in its present position, in about 1895.

The British Museum contains several architectural drawings of East Retford Church by Samuel Hieronymous Grimm. These include a general view of the exterior, and a drawing of the tracery of the east window. There are also drawings by Thomas Kerrich (1748-1828) including a drawing of a window which used to be in the Chancel, but which no longer exists. John Buckler (1770-1851) made several drawings of the church, including one of the figure in the vesica piscis, at the beginning of the nineteenth century.

While the church dates from the 13th century, in 1528 there was a great fire in Retford which damaged the church. In 1535, we learn that: "Where sumtyme were iiii chauntries which now er in decaye by reason they er consumed wt. fyer." The tower and chancel collapsed in 1651 and were rebuilt in 1658. The current building is therefore largely the work of restorers. The pinnacles were added to the tower in 1810. G.G. Place undertook further restorations between 1852 and 1855. The Chantry Chapel was rebuilt by George Frederick Bodley in 1873. There was a further restoration in 1905. 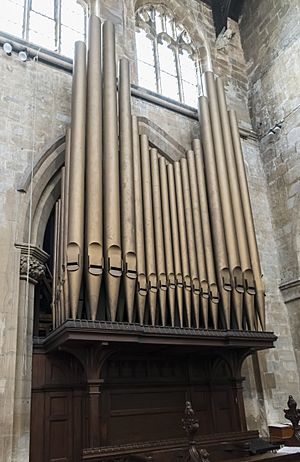 The church has had organs since at least the late eighteenth century. The organ has been rebuilt many times by J. W. Walker & Sons Ltd, Brindley & Foster, Henry Willis & Sons and Cousans.

St Swithun's is in a joint parish with:

All content from Kiddle encyclopedia articles (including the article images and facts) can be freely used under Attribution-ShareAlike license, unless stated otherwise. Cite this article:
St Swithun's Church, East Retford Facts for Kids. Kiddle Encyclopedia.