St Saviour’s Church, Retford is a Grade II* listed parish church in the Church of England in Retford.

The church dates from 1829. It was consecrated on 27 September 1829 by the Rt. Revd. Edward Venables-Vernon-Harcourt Archbishop of York as a daughter church of St John the Baptist Church, Clarborough, the church became a parish in its own right in 1871. It was restored in 1878. In 2002 it was united with St Swithun’s and St Michael’s in Retford to become a joint parish. Following further re-organisation, St. Saviour's became a single parish again in 2019 covering much of the east side of Retford. 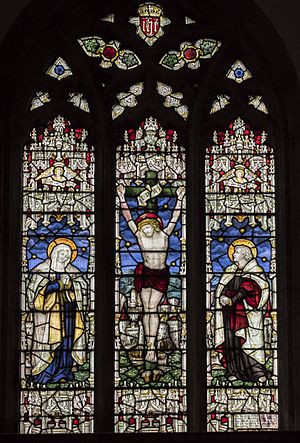 The Crucifixion; one of the windows with stained glas by C. E. Kempe, 1920

All content from Kiddle encyclopedia articles (including the article images and facts) can be freely used under Attribution-ShareAlike license, unless stated otherwise. Cite this article:
St Saviour's Church, Retford Facts for Kids. Kiddle Encyclopedia.