The Sternberg Centre for Judaism, in East End Road, Finchley, London, is a campus hosting a number of Jewish institutions, built around the 18th-century Finchley manor house.

The centre also hosted the Jewish Museum, Finchley until 2007.

The Movement for Reform Judaism has had its headquarters at the site since 1981. The Movement is the national umbrella organisation of 42 autonomous synagogues. Staff based at the Sternberg Centre work to support these synagogues including work with small communities, the Reform Beit Din (religious court), education, youth work, work with students and young adults and practical support for synagogues including HR, IT and communications.

Regular events are organised including a biennial Jewish music conference, residential weekends and events for people in mixed-faith relationships and those considering conversion to Judaism, a national biennial conference held at a regional venue and a northern Reform Jewish communities weekend.

Akiva School was established in 1981. It became a two-form entry voluntary aided school in 2007 and moved into a new purpose-built state-of-the-art building in January 2008. Akiva is the only voluntary-aided Progressive Jewish primary school in North West London. It is an inclusive and egalitarian learning community, teaching its children to be happy, confident and knowledgeable citizens, with a love of Israel and all aspects of Judaism. Akiva children are taught to understand and respect themselves, others and the world. 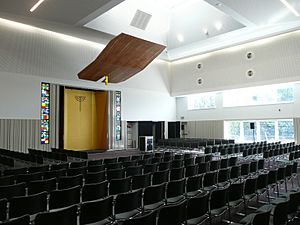 The synagogue, which is affiliated to the Masorti movement, was founded by followers of Louis Jacobs, and located to the Sternberg Centre site after some years of nomadic existence. The congregation, which now has about 2,400 members, raised over £6 million to construct a new synagogue building on the site, which was opened in 2011.

Designed by van Heyningen and Haward Architects, the new synagogue includes three prayer venues, a nursery and teenager’s room, as well as social and administrative spaces. The synagogue's rabbi is Jonathan Wittenberg.

Named in honour of Leo Baeck, the inspirational 20th-century German Reform rabbi, Leo Baeck College was founded in 1956 as a rabbinical school for training Liberal and Reform rabbis. Today, the college is a centre for the training of rabbis and teachers, an educational consultancy, helps the development of community leaders, provides access to Jewish learning for all through interfaith work. It is a degree-awarding institution, specialising in Hebrew and other Jewish related subjects. It is now based at the Sternberg Centre.

The Manor House Centre for Psychotherapy and Counselling (MHCPC) provides training for people working or planning to work in both paid and voluntary positions in the community. There are excellent teaching facilities, a library and cafeteria. The Training Programme has developed over many years experience enabling students to work effectively and creatively within the counselling field, in the community and in specific work places. The term "counselling" is used in many contexts and the variety of trainings and models can be confusing. The MHCPC offers comprehensive training in psychodynamic counselling leading to the Certificate in Counselling Skills or the Diploma in Psychodynamic Counselling and Therapy in the Community.

Opened as the Museum of the Jewish East End, founded by David Jacobs in 1983, the museum's main intent was the preservation of the heritage of London's East End, an important and large community which has since largely dissipated. Renamed the London Museum of Jewish Life in 1990, and subsequently amalgamating with the Jewish Museum in Camden Town, the museum diversified to include the history of other Jewish communities in London, and is also active in Holocaust and anti-racism education.

The Finchley museum closed in 2007 and moved in 2009 to an enlarged building on the Camden site, which has released space for the expansion of the Akiva School.

All content from Kiddle encyclopedia articles (including the article images and facts) can be freely used under Attribution-ShareAlike license, unless stated otherwise. Cite this article:
Sternberg Centre Facts for Kids. Kiddle Encyclopedia.