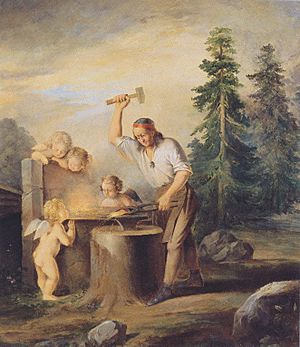 Seppo Ilmarinen, the Eternal Hammerer, blacksmith and inventor in the Kalevala, is an archetypal artificer from Finnish mythology. ("Seppo" is a popular boy's name and the Finnish word for smith "seppä" is derived from it, or vice versa.) Immortal, he is capable of creating practically anything, but is portrayed as unlucky in love.

He is described as working the known metals of the time, including brass, copper, iron, gold and silver. The great works of Ilmarinen include the crafting of the dome of the sky and the forging of the Sampo.

Finnish metal band Amorphis released a concept album in 2009 called Skyforger, which is based around the stories and legends of IImarinen.

All content from Kiddle encyclopedia articles (including the article images and facts) can be freely used under Attribution-ShareAlike license, unless stated otherwise. Cite this article:
Ilmarinen Facts for Kids. Kiddle Encyclopedia.