Staurikosaurus is a genus of Upper Triassic theropod dinosaurs found in Brazil. It was a small, lightly built carnivore.

The rarity of Staurikosaurus remains may be a result of it being uncommon while alive, or because it lived in an environment such as a forest, where fossils rarely form. 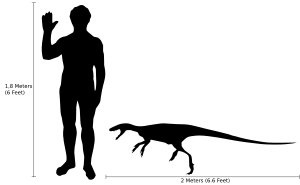 Size comparison between Staurikosaurus and a human.

At just 2.25 metres (7.4 ft), 80 centimetres tall (31 in), and weighing just 30 kilograms (66 lb), Staurikosaurus was tiny in comparison to later theropods like Megalosaurus. Staurikosaurus and the related Herrerasaurus are definitely theropods and evolved after the sauropod line had split from the theropods.

The fossil record of Staurikosaurus is poor, but the skeletal structure of the legs is known. Staurikosaurus was a quick runner for its size. It also had just two vertebrae joining the pelvis to the spine, a distinctly primitive arrangement.

The available teeth for Staurikosaurus strongly suggest a carnivorous diet.

The tail of Staurikosaurus was relatively long (with more than 40 vertebrae) compared to the rest of its body and was held straight and off the ground as it ran. The rear part of Staurikosaurus's tail is stiffened by features of the tail vertebrae. Ostrom thought this was a dynamic stabilizer to help balance while leaping and running.

All content from Kiddle encyclopedia articles (including the article images and facts) can be freely used under Attribution-ShareAlike license, unless stated otherwise. Cite this article:
Staurikosaurus Facts for Kids. Kiddle Encyclopedia.