Novius cardinalis (common names vedalia beetle or cardinal ladybird) is a species of ladybird beetle that is sometimes described as endemic to Australia. It was formerly placed in the genus Rodolia, but that genus was synonymized under the genus Novius in 2020.

The adult has a semispherical body, 2–4 mm long, covered with dense, short hairs. It is reddish-purple with black spots localized in several parts of its body, forming a net of contours between the spots. The head, posterior part of the prothorax across the full width, and the scutellum are all black. 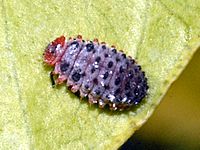 A larva of Novius cardinalis

The antenna are short and slightly clubbed, composed of 8 items, of which the proximal is markedly pulled aside. The legs have an extended and irregularly flattened tibia, forming a space housing the tarsus when at rest. The tarsus is composed of 3 tarsomeres, as in all coccinellids.

The larva is around 5mm long, reddish as the mature beetle or greyish, with black spots on the thorax. The left side has a series of tubercles, each bearing short bristles. The pupa is 4–5mm long. It is a red which darkens with age in as the abdomen darkens. 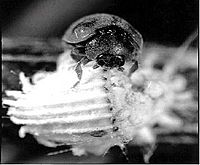 N. cardinalis regularly feed on aphids and small mites, which makes them good as biological control agents. They are only predatory to things smaller than them. Most of their food is herbivores, as carnivores are more likely to injure them as they are slow. Their flying capacities are limited so hunting in the air is not possible.

It is an active predator of cottony cushion scale Icerya purchasi.

N. cardinalis was accidentally introduced to New Zealand, though they are no longer very common. An outbreak of cottony cushion scale in California took place in the late 19th century, which led to some being imported from New Zealand in 1888 to help protect citrus trees.

There is a seat in the Palmer Gardens in North Adelaide, South Australia carrying a plaque that reads:

In recognition of the first ever major biological control success – the spectacular control of the cotton cushion scale insect in Californian citrus orchards by the predatory vedalia ladybird beetle.

Collected in North Adelaide in 1888.

Sponsored by the Australian Entomological Society, officially unveiled by the Rt Hon the Lord Mayor of Adelaide, on the occasion of the AGM of the Society, 27 September 1995

N. cardinalis was introduced into Californian citrus orchards in late 1888.

All content from Kiddle encyclopedia articles (including the article images and facts) can be freely used under Attribution-ShareAlike license, unless stated otherwise. Cite this article:
Novius cardinalis Facts for Kids. Kiddle Encyclopedia.