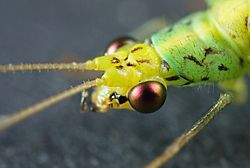 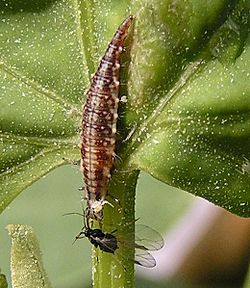 Larva of a common lacewing (Chrysoperla carnea) or perhaps C. mediterranea feeding on an aphid

Lacewings, or 'Green lacewings', are insects in the large family Chrysopidae of the order Neuroptera. There are about 85 genera and (differing between sources) 1,300–2,000 species in this widespread group. However, in America and Europe, the two genera Chrysopa and Chrysoperla are very common.

Most species of lacewings and their larvae are active predators, and are often used for biological control.

Many adults of Chrysopa can defend themselves by giving out a vile smell from glands at the front of their thorax.

They have 'ears' at the base of their front wings. When they hear bat echolocation sounds, they close their wings and drop down. They can escape spider webs, because, being so light, they do not create much vibration to alert the spider. Instead of struggling like most insects, the lacewing bites through the strands holding its legs and antennae. When it is stuck only by its wings, it become completely immobile. Slowly, the lacewing slides downwards out of the web. Tiny hairs on the wings prevent the sticky spider silk from touching the wings' surface.

The larvae are voracious, attacking other insects of suitable size, especially soft-bodied ones (aphids, caterpillars and other insect larvae, insect eggs). When they touch a potential prey object, the larva grasps it. Their maxillae are hollow, and inject a digestive secretion into the prey. The organs of an aphid can be dissolved by this in 90 seconds. 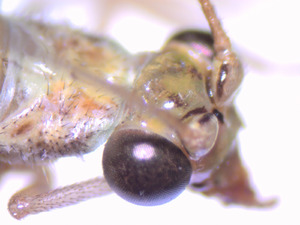 Neuropterans are soft-bodied insects with relatively few specialised features. They have large lateral compound eyes, and may or may not also have ocelli. Their mouthparts have strong mandibles suitable for chewing, and lack the various adaptations found in most other endopterygote insect groups.

They have four wings, which are usually similar in size and shape, and a generalised pattern of veins. Some neuropterans have specialised sense organs in their wings, or have bristles or other structures to link their wings together during flight.

The larvae are specialised predators, with elongated mandibles adapted for piercing and sucking. The larval body form varies between different families, depending on the nature of their prey. In general, however, they have three pairs of thoracic legs, each ending in two claws. The abdomen often has adhesive discs on the last two segments.

The larvae of most families are predators. Many chrysopids eat aphids and other pest insects, and have been used for biological control (either from commercial distributors, but also abundant and widespread in nature). Larvae in various families cover themselves in debris (sometimes including dead prey insects) as camouflage, taken to an extreme in the ant lions, which bury themselves completely out of sight and ambush prey from "pits" in the soil. Larvae of some Ithonidae are root feeders, and larvae of Sisyridae are aquatic, and feed on freshwater sponges. A few mantispids are parasites of spider egg sacs.

As in other holometabolic orders, the pupal stage generally is enclosed in some form of cocoon composed of silk and soil or other debris. The pupa eventually cuts its way out of the cocoon with its mandibles, and may even move about for a short while before undergoing the moult to the adult form.

Adults of many groups are also predatory, but some do not feed, or consume only nectar.

The use of Neuroptera in biological control of insect pests has been investigated, showing that it is difficult to establish and maintain populations in fields of crops.

Neuroptera have artistic demonstrations since beginning of civilizations, which can be found in numerous art galleries such as Lacewing Design Gallery and Studio of Northampton, Lacewing fine art of Salisbury.

The New Guinea Highland people claim to be able to maintain a muscular build and great stamina despite their low protein intake as a result of eating Neuroptera among other insects. 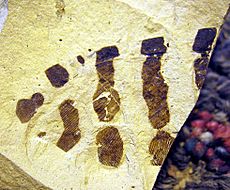 The understanding of neuropteran phylogeny has vastly improved since the mid-1990s, not the least courtesy of the ever-growing fossil record. In 1995, for example, it was simply known that the Megaloptera and Raphidioptera were not part of the Neuroptera in the strict sense, and the Mantispoidea and part of the Myrmeleontoidea were the only groups that could be confirmed by cladistic analysis. Though the relationships of some families remain to be fully understood, most major lineages of the Neuropterida can nowadays be robustly placed in an evolutionary context.

The phylogeny of the Neuroptera has been explored using mitochondrial DNA sequences, and while issues remain for the group as a whole (the traditional "Hemerobiiformia" being agreed (2014) to be paraphyletic), the Myrmeleontiformia is generally agreed to be monophyletic, giving the following cladogram:

All content from Kiddle encyclopedia articles (including the article images and facts) can be freely used under Attribution-ShareAlike license, unless stated otherwise. Cite this article:
Lacewing Facts for Kids. Kiddle Encyclopedia.