Antlion are a family of insects in the order Neuroptera with the scientific name Myrmeleontidae (sometimes misspelled as "Myrmeleonidae") most well-known genus is Myrmeleo. There are about 2,000 species.

Most people know this insect because of the funnel-shaped pit, up to 2 inches in diameter and depth, produced by the larval stages of this insect to trap ants. Larvae have globular abdomens and narrower, flattened heads bearing sickle-shaped jaws. Adults superficially resemble drab-colored, 1 ½ inch long damselflies with four long, narrow, net-veined wings roof-like held over a long, skinny abdomen when at rest. Unlike damselflies, however, ant-lion antennae are prominent and clubbed at the end. 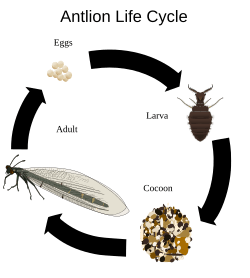 Apart from pit-trap-forming taxa, the biology of members of the family Myrmeleontidae, to which the antlions belong, has been little studied. The life-cycle begins with oviposition (egg-laying) in a suitable location. The female antlion repeatedly taps the prospective laying site with the tip of her abdomen and then inserts her ovipositor into the substrate and lays an egg.

Depending on the species and where it lives, the larva either conceals itself under leaves, debris or pieces of wood, hides in a crack or digs a funnel-shaped pit in loose material. As ambush predators, catching prey is risky because food arrives unpredictably and, for those species that make traps, maintaining one is costly; the larvae therefore have low metabolic rates and can survive for long periods without food. They can take several years to complete their life-cycle; they mature faster with plentiful food, but can survive for many months without feeding. In cooler climates they dig their way deeper and remain inactive during the winter. 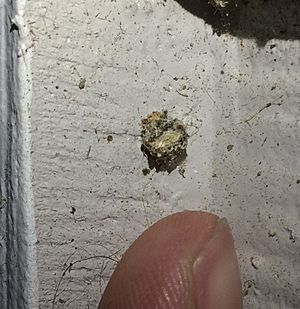 An antlion cocoon on the side of a house.

When the larva attains its maximum size, it pupates and undergoes metamorphosis. It makes a globular cocoon of sand or other local substrate stuck together with fine silk spun from a slender spinneret at the rear end of the body. The cocoon may be buried several centimetres deep in sand. After completing its transformation into an adult insect over the course of about one month, it emerges from the case, leaving the pupal integument behind, and works its way to the surface. After about twenty minutes, the adult's wings are fully opened and it flies off in search of a mate. The adult is considerably larger than the larva as antlions exhibit the greatest disparity in size between larva and adult of any type of holometabolous insect. This is by virtue of the fact that the exoskeleton of the adult is extremely thin and flimsy, with an exceptionally low mass per unit of volume. The adult typically lives for about 25 days, but some insects survive for as long as 45 days. 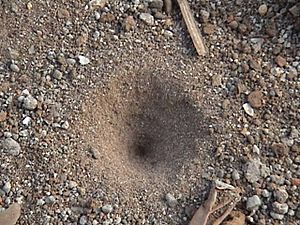 Sand pit trap of an antlion

Antlion larvae eat small arthropods – mainly ants – while the adults of some species eat pollen and nectar, and others are predators of small arthropods. In certain species of Myrmeleontidae, such as Dendroleon pantherinus, the larva, although resembling that of Myrmeleon structurally, makes no pitfall trap, but hides in detritus in a hole in a tree and seizes passing prey. In Japan, Dendroleon jezoensis larvae lurk on the surface of rocks for several years while awaiting prey; during this time they often become coated with lichen, and have been recorded at densities of up to 344 per square metre.

The larva is a voracious predator. Within a few minutes of seizing its prey with its jaws and injecting it with venom and enzymes, it begins to suck out the digestion products. The larva is extremely sensitive to ground vibrations, the low-frequency sounds made by an insect crawling across the ground; the larva locates the source of the vibrations by the differences in timing of the arrival of waves detected by receptors, tufts of hairs on the sides of the two hindmost thoracic segments. 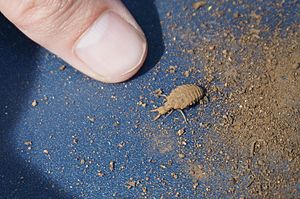 In trap-building species, an average-sized larva digs a pit about 2 in (5 cm) deep and 3 in (7.5 cm) wide at the edge. This behavior has also been observed in the Vermileonidae (Diptera), whose larvae dig the same sort of pit to feed on ants. Having marked out the chosen site by a circular groove, the antlion larva starts to crawl backwards, using its abdomen as a plough to shovel up the soil. By the aid of one front leg, it places consecutive heaps of loosened particles upon its head, then with a smart jerk throws each little pile clear of the scene of operations. Proceeding thus, it gradually works its way from the circumference towards the center. As it slowly moves round and round, the pit gradually gets deeper and deeper, until the slope angle reaches the critical angle of repose (that is, the steepest angle the sand can maintain, where it is on the verge of collapse from slight disturbance). When the pit is completed, the larva settles down at the bottom, buried in the soil with only the jaws projecting above the surface, often in a wide-opened position on either side of the very tip of the cone. The steep-sloped trap that guides prey into the larva's mouth while avoiding crater avalanches is one of the simplest and most efficient traps in the animal kingdom. Since the sides of the pit consist of loose sand at its angle of repose, they afford an insecure foothold to any small insects that inadvertently venture over the edge, such as ants. Slipping to the bottom, the prey is immediately seized by the lurking antlion; if it attempts to scramble up the treacherous walls of the pit, it is speedily checked in its efforts and brought down by showers of loose sand which are thrown at it from below by the larva. By throwing up loose sand from the bottom of the pit, the larva also undermines the sides of the pit, causing them to collapse and bring the prey with them. Thus, it does not matter whether the larva actually strikes the prey with the sand showers.

Antlion larvae are capable of capturing and killing a variety of insects and other arthropods, and can even subdue small spiders. The projections in the jaws of the larva are hollow and through this, the larva sucks the fluids out of its victim. After the contents are consumed, the dry carcass is flicked out of the pit. The larva readies the pit once again by throwing out collapsed material from the center, steepening the pit walls to the angle of repose. 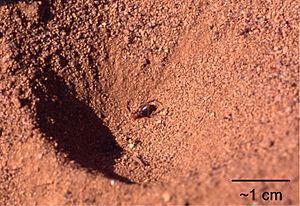 Sand pit trap with remains of an ant

Antlion larvae require loose soil, not necessarily but often sand. The larvae prefer dry places protected from the rain. When it first hatches, the tiny larva specialises in very small insects, but as it grows larger, it constructs larger pits, and thus catches larger prey, sometimes much larger than itself.

Other arthropods may make use of the antlion larva's ability to trap prey. The larva of the Australian horsefly (Scaptia muscula) lives in antlion (for example Myrmeleon pictifrons) pit traps and feeds on the prey caught, and the female chalcid wasp (Lasiochalcidia igiliensis) purposefully allows itself to be trapped so that it can parasitise the antlion larva by ovipositing between its head and thorax.

All content from Kiddle encyclopedia articles (including the article images and facts) can be freely used under Attribution-ShareAlike license, unless stated otherwise. Cite this article:
Antlion Facts for Kids. Kiddle Encyclopedia.