Flag of Plymouth facts for kids

The flag of Plymouth is the flag of the port city and unitary authority of Plymouth in Devon, United Kingdom. It consists of a white shield, containing a green diagonal cross separating four black towers, on a field of red. 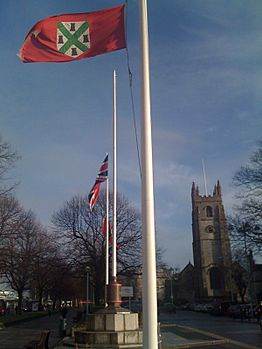 The four towers of the flag represent the four forts surrounding and defending the city dating back to the English Civil War era, and are visible on the city council's coat of arms. The city's motto, turris fortissima est nomen jehova translates as the 'strongest tower is the name of Jehovah', and this refers to the city's successful resistance to the Royalist siege during that conflict.

All content from Kiddle encyclopedia articles (including the article images and facts) can be freely used under Attribution-ShareAlike license, unless stated otherwise. Cite this article:
Flag of Plymouth Facts for Kids. Kiddle Encyclopedia.