The State Theatre is a historic theatre in Minneapolis, Minnesota. It is one of four restored theatres in the Hennepin Theatre District.

The State Theatre seats 2,181. It opened in 1921 and was considered the most technologically advanced and elaborate theatre in the United States. It was designed by Chicago architect J.E.O. Pridmore in a free Italian Renaissance style and boasted the first well-driven air conditioning system in Minneapolis. The original stage floor was glass, lit from underneath to create stunning visual effects. The opening night program included a silent film, newsreel and travelogue. A Wurlitzer pipe organ was installed in 1925 and concerts were held every day for 25 cents. The State’s neon marquee was installed in the 1940s and runs the entire width of the theatre. Between 1921 and 1978, the State Theatre was used primarily as a movie house, but also hosted vaudeville acts, concerts and ballet. The movie screen was the largest screen west of the Mississippi River at the time. Butch Cassidy and the Sundance Kid set a national record at the State in 1970 for the longest run in America, and the final picture show was Tommy on New Year's Eve 1975. 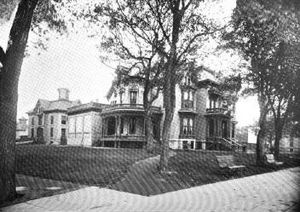 The theatre was built on the site of the first mansion constructed by T. B. Walker in 1874 for his family at 803 Hennepin Avenue. His home stood there for forty years until it was demolished to make way for the theatre complex.

From 1978 to 1989, the building was the home of Jesus People Church. The historic exterior State Theater signage was removed and church signage was installed. Interior alterations were also made.

The Minneapolis Community Development Agency purchased the LaSalle Plaza block in 1989, including the State, as part of the LaSalle Plaza development. After nearly two years of renovation at a cost of $8.8 million, the State Theatre re-opened in November 1991 with the Minnesota Opera’s production of Carousel. The restored proscenium spans almost the full width of the building and curves 100 feet above the stage. The six chandeliers in the house are original, as are the murals on the walls. Since the re-opening in 1991, the State has hosted live Broadway touring productions such as Avenue Q, Sweeney Todd and Joseph and the Amazing Technicolor Dreamcoat, concerts featuring Patti Smith and Gordon Lightfoot, author and adventure speaker series and films including the world premiere of the Minnesota-based movie, Grumpy Old Men. The theater was featured in the film Jingle All the Way with Arnold Schwarzenegger and Sinbad in 1996. Hennepin Theatre Trust has been the owner and operator of the State Theatre since 2005.

All content from Kiddle encyclopedia articles (including the article images and facts) can be freely used under Attribution-ShareAlike license, unless stated otherwise. Cite this article:
State Theatre (Minneapolis) Facts for Kids. Kiddle Encyclopedia.