Golden Valley is a western and first-ring suburb of Minneapolis in Hennepin County, Minnesota, United States. The city is mostly residential and is bordered by U.S. Highway 12 (Interstate 394). Over 15% of the city is parks or nature reserves. The Floyd B. Olson Memorial Highway also runs through the heart of the city providing a direct route to the Minneapolis industrial district.

Golden Valley is the main corporate headquarters of General Mills, a major flour milling and food products company originally located in Minneapolis. It is also the site of the U.S. headquarters of Pentair and local NBC affiliate KARE. The city was also home to the former Minneapolis-Honeywell headquarters, which is now the Resideo Technologies corporate offices.

Tribes of Chippewa and Sioux had encampments on nearby Medicine Lake. The first white settlers arrived in the early 1850s. Golden Valley was incorporated December 17, 1886. In the early twentieth century, it was mostly a farming community. 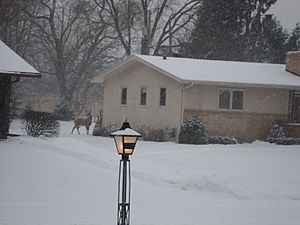 A deer in a Golden Valley neighborhood

There were 8,816 households, of which 25.6% had children under the age of 18 living with them, 50.3% were married couples living together, 8.1% had a female householder with no husband present, 3.1% had a male householder with no wife present, and 38.6% were non-families. 30.4% of all households were made up of individuals, and 14.5% had someone living alone who was 65 years of age or older. The average household size was 2.26 and the average family size was 2.84. 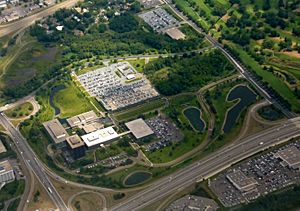 Major employers in the city include:

Even though the population of Golden Valley is around 20,000, more than 30,000 people work in Golden Valley. This is because of the presence of large employers including General Mills, Honeywell, and Pentair.

According to Golden Valley's 2010 Comprehensive Annual Financial Report, the top employers in the city were: 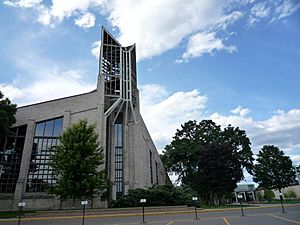 The chapel at Breck School, a private Episcopal school in Golden Valley

King of Grace Lutheran School is a Christian preschool, elementary school, and middle school of the Evangelical Lutheran Synod in Golden Valley.

What is currently the site of the Perpich Center for Arts Education was originally the Golden Valley Lutheran College, which closed in 1985.

All content from Kiddle encyclopedia articles (including the article images and facts) can be freely used under Attribution-ShareAlike license, unless stated otherwise. Cite this article:
Golden Valley, Minnesota Facts for Kids. Kiddle Encyclopedia.