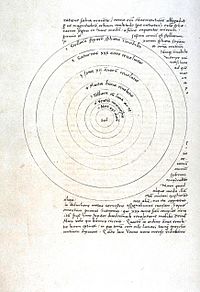 'Heliocentric model' of the solar system with the Sun in the centre. Copernicus' manuscript

De revolutionibus orbium coelestium (On the revolutions of the heavenly spheres) is great work of the Renaissance astronomer Nicolaus Copernicus (1473–1543).

The book, first printed in 1543 in Nuremberg, Holy Roman Empire of the German Nation, offered proof that the Earth went round the Sun, and not vice versa, as had been thought.

This was an alternative model of the universe to Ptolemy's Earth-centered system, which had been accepted since ancient times.

Copernicus had worked his ideas out many years before, but was afraid to publish, fearing the anger of the Roman Catholic Church. Finally, the book was published just before he died.

In its standard English edition, the book contains 330 folio pages, 100 pages of tables, and over 20,000 tabulated numbers.

The book is dedicated to Pope Paul III in a preface that argues that mathematics, not physics, should be the basis for understanding and accepting his new theory.

De revolutionibus is divided into six "books" (sections or parts):

This book is often referred to as the start of modern science.

All content from Kiddle encyclopedia articles (including the article images and facts) can be freely used under Attribution-ShareAlike license, unless stated otherwise. Cite this article:
De revolutionibus orbium coelestium Facts for Kids. Kiddle Encyclopedia.