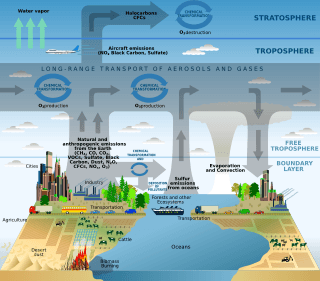 Example of scientific modelling. A schematic of chemical and transport processes related to atmospheric composition.

A scientific model is a simplified abstract view of a complex reality. Scientific models are used as a basis for scientific work. They can be used to explain, predict, and test, or to develop computer programs or mathematical equations.

An example of a complex model is the software used for weather forecasts. The program is based on equations for the variables which affect weather. Meteorological data is fed in, and the program produces predictions (graphs and data) of future weather patterns.

For instance, models of our universe are part of astrophysics - the biggest things in nature - and physics - the smallest. This is not usually what we mean by nature, however. We mean the models studied in biology, ecology, economics, environmental health and healing. Most models of nature are of things that humans really affect directly, and which affect humans back:

For instance, to dump toxic waste in a river will harm others down the river. But without models of nature we do not know who, and cannot say how much is harmed or harmful.

Models of nature affect human decision-making. They are very important to human health, wellness and economics. They also matter in ethics, since most people wish to reduce harm done by their decisions. They matter in law because harms can be proven to have been done in a court.

A forest is very hard to bring back to life, once it is degraded. Smaller models of bits of nature help to understand how much must be left, so future generations can use nature too.

In many ways humans and nature can be said to be in conflict. Natural capital like soil and large healthy trees, which nature needs to make more of itself, is also useful to humans as natural resources. To know how much can be drawn out of nature, before it dies, is important. This is another reason for a model:

There are three main ways in which models of nature affect human life:

To preserve nature, ecology movement activists now cooperate in a global power network. It includes not just parties in politics but also NGOs like Greenpeace, Earth First or World Wide Fund for Nature.

One model of nature they have agreed on is a map that shows ecoregions, which are the natural borders of ecology maps. According to this map, there are 867 regions divided into 8 ecozones - plus others which are in the ocean.

Most anthropologists agree that aboriginal languages have a small model of local nature in them. For instance, there will be more words to describe snow in an Arctic language, and more words to describe shades of green in a rainforest. This is part of the reason to use ecology borders in politics, since people who do not live inside the border do not see or make the same distinctions about nature.

A very small number of people think that humans do not need nature at all, and can replace everything that it does. To prove them wrong, some economists made another model of nature:

Economists study nature's services to see how hard it would be to replace what nature does for humans. They showed in 1995 that the services nature performed for humans were more valuable than all services humans perform for each other all over the world. The value of Earth as a living thing was much more than we could ever afford to replace with our own technology. There has been no real disagreement about any of this.

Pricing all the value of Earth to humans gives a huge number - which proves the pricing is right, since, we must put a high price on anything we have no way to replace.

All content from Kiddle encyclopedia articles (including the article images and facts) can be freely used under Attribution-ShareAlike license, unless stated otherwise. Cite this article:
Scientific model Facts for Kids. Kiddle Encyclopedia.