Shape of the universe facts for kids 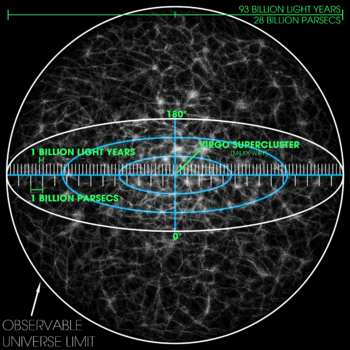 Visualization of the 93 billion light year – or 28 billion parsec – three-dimensional observable universe. The scale is such that the fine grains represent collections of large numbers of superclusters. The Virgo Supercluster – home of Milky Way – is marked at the center, but is too small to be seen in the image. 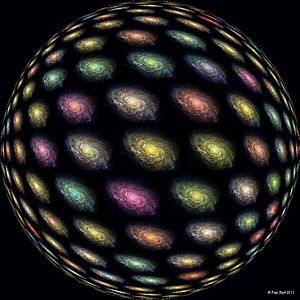 Universe in an expanding sphere. The galaxies farthest away are moving fastest and hence experience length contraction and so become smaller to an observer in the centre.

The shape of the Universe cannot be discussed with everyday terms, because all the terms need to be those of Einsteinian relativity. The geometry of the universe is therefore not the ordinary Euclidean geometry of our everyday lives.

What astrophysicists do is ask whether a particular model of the universe is consistent with what is known through observations and measurements of the universe. If the observable universe is smaller than the entire universe (in some models it is many orders of magnitude smaller or even infinitesimal), observation is limited to a part of the whole.

Consideration of the shape of the universe can be split into two:

Recent measurements have led NASA to state, "We now know that the universe is flat with only a 0.4% margin of error". Within one model, the FLRW model, the present most popular shape of the Universe found to fit observational data is the infinite flat model. There are other models that also fit the data.

All content from Kiddle encyclopedia articles (including the article images and facts) can be freely used under Attribution-ShareAlike license, unless stated otherwise. Cite this article:
Shape of the universe Facts for Kids. Kiddle Encyclopedia.