The title of this article contains the character ß. Where it is unavailable or not wanted, the name may be written as Arthur Seyss-Inquart.

Dr Arthur Seyß-Inquart (born Arthur Zajtich on 22 July 1892–16 October 1946) was a prominent lawyer and later Nazi official in pre-Anschluß Austria, the Third Reich and in wartime Germany, Poland, and the Netherlands. Seyß-Inquart was executed at the Nuremberg Trials for crimes against humanity.

Life before the Anschluss

Seyß-Inquart was born in 1892 in Stonařov (Stannern), Moravia, then part of the Austro-Hungarian Empire, to school principal Emil Zajtich and his wife Auguste Hyrenbach. The family moved to Vienna in 1907, where they changed the Czech Slavic name of "Zajtich" to the German "Seyß-Inquart". Seyß-Inquart later studied law at the University of Vienna. At the beginning of World War I in August 1914, Seyß-Inquart enlisted in the Austrian Army and served in Russia, Romania and Italy. He was decorated for bravery on a number of occasions, and while recovering from wounds in 1917 he completed his final examinations for his degree.

He went into law after the war, and in 1921 set up his own practice. During the early years of the first Austrian republic, he was close to the Vaterländische Front.

As a successful lawyer, he was asked to join the cabinet of Chancellor Engelbert Dollfuss in 1933.

Head of Ostmark and Southern Poland

Hitler was going to leave Austria independent, but after the welcome the invading German troops got during the Anschluß he decided to make Austria a new part of the Third Reich, called Ostmark (or eastern boundary) . Seyß-Inquart wrote the statute which made Austria a province of Germany, and signed it into law on 13 March.

Seyß-Inquart became Reichsstatthalter or Governor of the so-called Ostmark. Ernst Kaltenbrunner was chief minister, and Burckel Commissioner for the Reunion of Austria (concerned with the "Jewish Question").

Seyß-Inquart was made an SS Gruppenführer, and in May 1939 Minister without portfolio in Hitler's government.

Reichskommissar in the Netherlands

After Germany invaded the Low Countries, Seyß-Inquart became Reichskommissar for occupied Netherlands in May 1940. His job was to organize civil administration, create close economic ties with Germany and defend the interests of the Reich.

He supported the Dutch National Socialist Party (NSB) and allowed it to create a paramilitary Landwacht, as an auxiliary police force. Other political parties were banned in late 1941, and many former government officials imprisoned at Sint-Michielsgestel. The administration of the country was largely controlled by Seyß-Inquart himself.

He introduced measures to combat 'terror', and when a widespread strike took place in Amsterdam, Arnhem and Hilversum in May 1943 special summary court-martials were held and a collective fine of 18 million guilders was imposed. Seyß-Inquart authorized the execution of around 800 people before liberation. Some people say it was not merely 800 but over 1,500, including executions under the so-called "Hostage Law" involving (among others) political prisoners who were close to being liberated, the Putten incident, and the reprisal execution of 117 Dutchmen for the attack on SS and Police Leader" Hanns Albin Rauter. From July 1944 on, most of Seyß-Inquart's powers were transferred to the military commander in the Netherlands and the Gestapo, but he was still an important and powerful political figure.

There were two small concentration camps in the Netherlands:

There was also a "Jewish assembly camp" at Westerbork, in addition to a number of other camps controlled by the military, the police, the SS or Seyß-Inquart's administration. These included a "voluntary labor recruitment" camp at Ommen. A total of around 530,000 Dutch civilians worked for the Germans, of whom 250,000 were sent to factories in Germany.

Seyss-Inquart was an anti-Semite: within a few months of his arrival in the Netherlands, he sacked Jews from government, the press and leading positions in industry. Anti-Jewish measures escalated after 1941: approximately 140,000 Jews were registered, a ghetto was created in Amsterdam and a transit camp set up at Westerbork. In February 1941, 600 Jews were sent to the Buchenwald and Mauthausen concentration camps. Later, Dutch Jews were sent to Auschwitz. As Allied forces approached in September 1944 the remaining Jews at Westerbork were sent to Theresienstadt. Of 140,000 registered Dutch Jews, only 44,500 survived the war.

The Nazi regime had tried a 'scorched earth' policy, and also destroyed some docks and harbors. Seyß-Inquart agreed with Armaments Minister Albert Speer that destroying everything to keep valuable materials from Allied forces or a new government after the war was wrong. Seyß-Inquart also helped in the so-called 'hunger winter' of 1945 to distribute food, and allowed Allied airplanes to drop Swedish white bread for the hungry people of occupied northern Netherlands. He remained Reichskommissar until 8 May 1945, when, after a meeting with Karl Dönitz to confirm his blocking of the scorched-earth orders, he was captured in Hamburg. 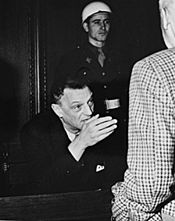 At the Nuremberg Trials, Seyß-Inquart faced charges of conspiracy to commit crimes against peace; planning, starting and fighting wars of aggression; war crimes; and crimes against humanity.

His defence lawyer was Gustav Steinbauer. Seyß-Inquart was nonetheless found guilty of all charges except conspiracy. On hearing of his death sentence, Seyss-Inquart made it clear he accepted responsibility for excesses during the war, "Death by hanging...well, in view of the whole situation, I never expected anything different. It's all right". He was hanged on 16 October 1946, at the age of 54, together with nine other Nuremberg defendants. His last words were "I hope that this execution is the last act of the tragedy of the Second World War and that the lesson taken from this world war will be that peace and understanding should exist between peoples. I believe in Germany".

All content from Kiddle encyclopedia articles (including the article images and facts) can be freely used under Attribution-ShareAlike license, unless stated otherwise. Cite this article:
Arthur Seyß-Inquart Facts for Kids. Kiddle Encyclopedia.