Knödel or Klöße are large round poached or boiled potato or bread dumplings, made without yeast. They are normal parts of Austrian, German, Hungarian and Czech cuisine. They come in many different forms. They can be made from flour, potatoes, old bread, semolina, etc. In most types, they are used as a side dish for meat. They can also be served as a dessert or in a soup. 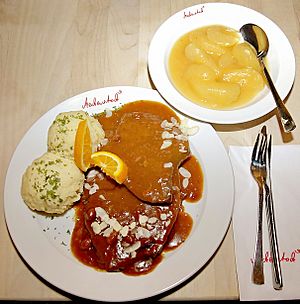 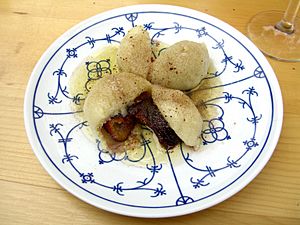 In Hungary, they are called gombóc; in the Czech Republic, knedlík; in Luxembourg, Kniddel(en), cnigle in Bukovina; and, in Italy, canederli. In some parts of the United States, klub is used to mean potato dumplings.

Klöße are large dumplings, steamed or boiled in hot water, made of dough from grated raw or mashed potatoes, eggs and flour. Similar semolina crack dumplings are made with semolina, egg and milk. They are called Grießklößchen.

Thüringer Klöße are made from raw or boiled potatoes, or a mixture of both, and are often filled with croutons or ham.

In Austria and Hungary they make large sweet dumplings or plum dumplings called Zwetschkenknödel. Gombotzen are made with flour & potato batter, by wrapping the potato dough around whole plums or apricots. They then are boiled and rolled in hot buttered caramelized bread crumbs.

Topfenknödel are made with quark cheese (Topfen) and are traditionally topped with cinnamon sugar and served with apple sauce or with streusel.

All content from Kiddle encyclopedia articles (including the article images and facts) can be freely used under Attribution-ShareAlike license, unless stated otherwise. Cite this article:
Knödel Facts for Kids. Kiddle Encyclopedia.