Qantassaurus (/ˌkwɑːntəˈsɔːrəs/ KWAHN-tə-SOR-əs) is a genus of two-legged, plant-eating ornithischian dinosaur that lived in Australia about 115 million years ago, when the continent was still partly south of the Antarctic Circle. It was described by Patricia Vickers-Rich and her husband Tom Rich in 1999 after a find near Inverloch, and named after Qantas, the Australian airline.

"The jaw is unique because it is short and stocky, whereas other jaws ... are long and slender"

Qantassaurus was probably about 1.8 meters (6 feet) long, and about one meter (3 feet) high. If it resembled its relatives, it had short thighs and long shins, and probably was a fast runner. Its feet had claws for traction, and a long tail probably helped with turning, stiffened by ossified tendons. One characteristic of the "Polar Victorian" euornithopods are distinctive spurs, or trochanters, on the upper surface of the thigh bone (or femur), where muscle was attached. 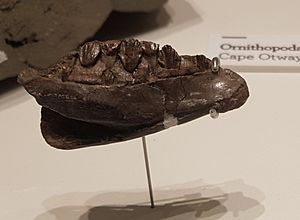 Jaw of Qantassaurus intrepidus at the Melbourne Museum

Qantassaurus is only known from jaw fragments. These are foreshortened compared to related species so its face was probably short and stubby. It had ten teeth in each lower jaw. It probably had a beak, and possessed leaf-shaped teeth back in its cheek, which were shed as they wore down, and replaced by new teeth growing up from the jaw. The teeth had eight distinctive vertical ridges on the outer side with a single larger primary ridge in the centre.

Qantassaurus lived 115 million years ago in Australia, during the late Aptian/early Albian age of the early Cretaceous period. At the time, Australia was part of the supercontinent of Gondwana, and partly within the Antarctic Circle, although the significance of polar conditions during the warm Cretaceous were greatly different from conditions in this region today. The average temperature of the region is contentious, with estimates ranging from -6 to well over 5 °C (21 to 37 °F). Conditions were likely to be at their coldest during the polar nights, which lasted up to three months.

One interpretation of the fossil material is that small ornithopods had adaptations to survive cooler conditions. Bone growth of presumed related taxa shows they were active all year round, so they did not hibernate through the winter. The structure of these bones also suggests warm-bloodedness, which would help maintain its body heat.

Qantassaurus was probably a browser, who grabbed ferns and other vegetation with its hands, and ran away from predators like a modern gazelle. 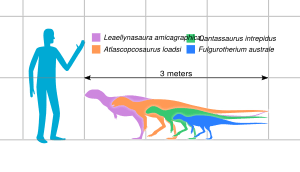 Size of Qantassaurus (in green) compared to other Australian ornithischians

In this regard, it is one of four ornithischian species once considered hypsilophodontids from southeast Australia, along with Leaellynasaura amicagraphica, Atlascopcosaurus loadsi, and Fulgurotherium australe. The four taxa are mostly known from isolated bones and teeth; however the thigh bones of F. australe are very diverse and may belong to three genera. 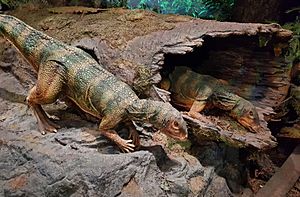 Model of Qantassaurus at the Melbourne Museum

Qantassaurus was discovered on 27 February 1996, during the third annual field season of the Dinosaur Dreaming project, a dig jointly run by Monash University and the National Museum of Victoria. The dig occurs on the beach of the Bunurong Marine Park at the intertidal site known as Flat Rocks, near Inverloch, in southeastern Victoria, Australia. The rock outcrops at this site are part of the Wonthaggi Formation of the Strzelecki Group, which during the Aptian stage were deposited in floodplains with braided river channels. The holotype specimen, NMV P199075, a fifty-six millimetres long single left dentary of the lower jaw, containing ten teeth (three unerupted), was found by Mrs Nicole Evered, a long time participant of the dig. Two other jaws, specimens NMV P198962, a left dentary, and NMV P199087, a right dentary, found at the same site the same year have also been tentatively associated with, or referred to, the species.

It was named Qantassaurus intrepidus by Patricia Vickers-Rich and Tom Rich, in honor of the Queensland and Northern Territory Aerial Services, which shipped fossils around the country as part of the Great Russian Dinosaurs Exhibit between 1993 and 1996, and sponsored expeditions to South America and Eastern Europe. QANTAS is an acronym, which is why a u does not follow the q in Qantassaurus. The specific name means "intrepid" in Latin, referring to the climatic challenges the small dinosaur had to face.

All content from Kiddle encyclopedia articles (including the article images and facts) can be freely used under Attribution-ShareAlike license, unless stated otherwise. Cite this article:
Qantassaurus Facts for Kids. Kiddle Encyclopedia.