Queensland National Bank is a heritage-listed former bank and now museum at 87 Alfred Street, Charleville, Shire of Murweh, Queensland, Australia. It was designed by Francis Drummond Greville Stanley and built in 1888 by A Anderson. It is now known as Historic House Museum. It was added to the Queensland Heritage Register on 21 October 1992. 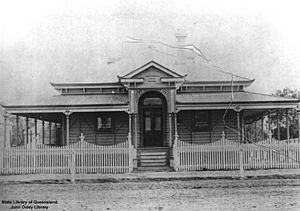 The former bank building was constructed in Charleville in 1888 as the premises of the Queensland National Bank, which had established a branch in the town in 1881.

The town of Charleville was surveyed in 1867 following the surveying of a number of pastoral runs in the district in 1863. Sited on the banks of the Warrego River along a stock route from New South Wales to Western Queensland, the town was to develop as the major service centre for the surrounding pastoral industry. Bullock teams passed through the town, Cobb & Co established stables (as well as a factory for the construction of mail coaches and buggies and an associated sawmill) and in 1888 Charleville's position as a strategic transport node for the south west was confirmed when it became the terminus for the main Western railway line which was extended south to Cunnamulla in 1898 and west to Quilpie in 1917. The Queensland National Bank was the first bank to open a branch in Charleville on 30 July 1881.

The Queensland National Bank was the first and most successful of Queensland's three indigenous 19th century banks. It was established in March 1872 by a group of prominent Queensland squatters, politicians, lawyers, and businessmen who wished to secure development capital free from overseas or intercolonial control. Its first office was established in Queen Street, Brisbane in that year and the bank attracted widespread Queensland patronage. In 1879 it secured the whole of the Queensland Government's banking business. By 1880 it held 40% of deposits in the colony and dominated the Queensland economy. 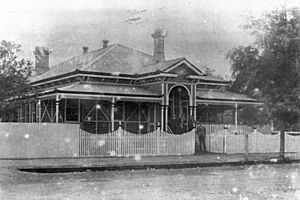 The Charleville bank combined business and accommodation areas, as was common practice at the time for branch offices. At the front of the building were a public access area with a teller's area and safe and a manager's office. The rear section of the building provided living accommodation for the manager and his family, including a room for their maid. This and the quality of finish in the building suggest the social position of a manager of the bank in a regional town.

In 1942, probably as the result of a wartime rationalisation of branches in smaller centres, the Charleville branch was sold to Mr Alex Smith who used it as a residence during his lifetime. In 1948, the Queensland National Bank merged with the National Bank of Australasia, later the National Australia Bank. After the death of Mr Smith his daughter, Mrs Claude Young, converted it into a boarding house, and upon her death the Charleville and District Cultural and Historical Society purchased the building, which is now a local history museum. 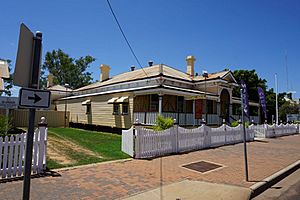 The former Queensland National Bank at Charleville is a single storey timber building with an exposed frame and is set on low stumps. It has a hipped roof clad with corrugated iron roof. There are verandahs to the front and sides of the building that have a corrugated iron clad awning supported by timber posts. A projecting central portico rising through the verandah awning marks the entrance to the building and is reached by timber steps. 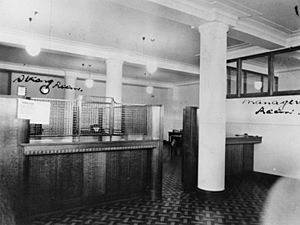 Internally the building features high ceilings and cedar joinery and has four marble fireplaces. Several of the rooms are furnished as a place museum.

There is a picket fence to the street.

The former Queensland National Bank in Charleville was listed on the Queensland Heritage Register on 21 October 1992 having satisfied the following criteria.

The former Queensland National Bank building is important in illustrating the development of Queensland as purpose-built premises for a bank formed to serve Queensland interests and needs when the state was a self-governing colony. The quality of its design and construction also demonstrate the importance of this regional branch at a time when Charleville was firmly established as a centre for the pastoral industry of southwest Queensland.

The former Queensland National Bank is important in demonstrating the principal characteristics of a regional bank of its era, being a good example of a timber structure combining a banking chamber, office and manager's residence; a type common for rural bank buildings from the nineteenth century until World War II.

As a well-designed and detailed building the former Queensland National Bank contributes to the townscape of Charleville.

All content from Kiddle encyclopedia articles (including the article images and facts) can be freely used under Attribution-ShareAlike license, unless stated otherwise. Cite this article:
Queensland National Bank, Charleville Facts for Kids. Kiddle Encyclopedia.