Cobar is a town in central western New South Wales, Australia. The town is 712 km (442 mi) northwest of the state capital, Sydney. It is at the crossroads of the Kidman Way (to Queensland) and Barrier Highway (to South Australia). The town and the local government area, the Cobar Shire, are on the eastern edge of the outback. At the 2011 census, the town of Cobar had a population of 3,817, Cobar Shire a population of about 4,700. The Shire has an area of 44,065 square kilometres (17,014 sq mi)—about two-thirds the size of Tasmania.

The name Cobar is derived from the Aboriginal Ngiyampaa word for copper, Kuparr, Gubarr or Cuburra, meaning 'red earth' or 'burnt earth', the ochre used in making body paint for Corroborees. The name also represents an Aboriginal attempt to pronounce the word 'copper'. Some of the most significant Aboriginal rock art in NSW is found within the Cobar Shire. The indigenous Ngiyampaa/Wangaapuwan traditions of this diverse bio-region are best represented in the rock art of Mount Grenfell, 40 km west of Cobar. Over 1,300 depictions of humans and animals, as well as hand stencils are found at this site.

Pastoralists began to settle the area in the mid-1860s.

One of these pastoralists, a man known as 'Papa Cornish', rescued a party of Aboriginal trackers from near-certain death in the early 1870s; in gratitude, they guided him to Australia's largest copper deposit. This led to settlements being founded with Australia's European and Asian gold rush immigrant arrivals. The Great Cobar Copper Mining Company Limited was established in 1878. It and subsequent companies operated a number of light railways carrying ore and similar material, as well as timber for mine supports. Cobar and many mining outskirts accommodated the miners who travelled to the area in the late 1880s. The overwhelming majority of these were of Cornish Australian stock at the time. Several fine heritage buildings from the late 1880s/early 1900s settlement are still in existence, including the Great Western Hotel (1898), reputed to have the longest iron lace verandah in the Southern Hemisphere, the Cobar Court House (1887) and Court House Hotel (1895) in Barton Street, as well as the interesting Cobar Heritage and Visitor Information Centre, located in the beautiful former Mines Office (1910). On Hillston Road southeast out of town is Fort Bourke Hill, which affords an excellent view of the town, as well as the historic Towser's Huts, a series of stone miners' cottages dating back as early as the 1890s, possibly even the 1870s, and built by an Italian miner by the name of Antonio Tozzi. 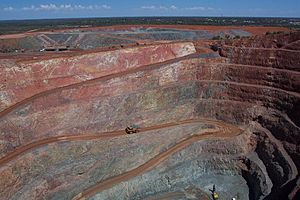 At its peak, Cobar had a population on 10,000 and its own stock exchange. However, copper mining operations slowed in 1920, and by the 1930s the town's population had dropped to little over 1,000, only to rise again and stabilise at around 3,500 through the 1970s and early 1980s. Copper mining was intermittent until 1965 when full-time operations resumed. In the 1980s, Gold, silver, lead and zinc were discovered in the area, which led to a further population increase. The town's current positive economic development is due to the affluence of the mining boom. Three important mining belts are operational in the Cobar area: the Cobar belt, the Canbelego belt and the Girilambone belt. Visits to mine sites may be arranged through the Cobar Heritage and Visitor Information Centre overlooking the open cut mine. The Festival of the Miners' Ghost, held during the last weekend in October, is a festival celebrating the spirits of the old miners.

Cobar has a semi-arid climate (Köppen climate classification BSh) with hot summers and cool winters. It has a median annual rainfall of 390mm. Rainfall is extremely variable, particularly in late summer and early spring. The highest rain falls have been in excess of 200mm in any one month. Rainfall is generally only about 4 days per month.

Annual mean wind speed at 9am and 3 pm is about 12.2 km/h with lesser speeds on winter mornings.

A direct air service to Dubbo is offered from Cobar Airport. NSW TrainLink operates a coach service from Dubbo.

All content from Kiddle encyclopedia articles (including the article images and facts) can be freely used under Attribution-ShareAlike license, unless stated otherwise. Cite this article:
Cobar Facts for Kids. Kiddle Encyclopedia.